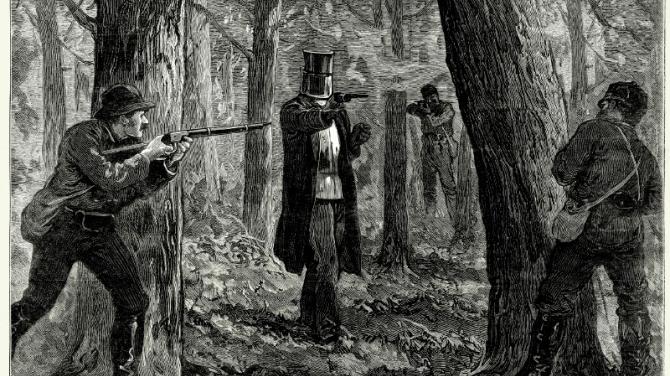 THE misty dawn of June 28th, 1880 marked the twilight of Australia’s infamous ‘bushrangers’ - rugged outlaws who stalked the torrid scrubs and backwoods in search of plunder - but also bore witness to the birth of an enduring legend.

That fateful morning, authorities had reason to believe they had the Kelly gang, Victoria’s most notorious highwaymen, cornered once and for all.

Two years of raids and heists had pre-empted the seizure of the Glenrowan Inn, where the gang played cards, drank and sang lustily with their 62 hostages as they awaited the arrival of a police train they sought to ambush.

In accomplishing this, it was hoped, the gang could ride unmolested to the nearby town of Benalla, pilfering freely of its banks and releasing prisoners incarcerated in the local gaol.

Of course, history tells of how the Kelly gang’s plan wilted - or, rather, was shot to pieces - under withering volleys of rifle fire courtesy of local police.

Their cordon around the Inn essentially besieged the motley band of outlaws, pinning the tail on an elusive donkey that had hitherto been rampaging through the state of Victoria.

Constable James Arthur was the first to see the strange figure down on the wooded slope. An otherworldly silhouette marching steadily, relentlessly, in the direction of the Inn, veiled in the humid steam rising from the bush.

At first glance it appeared to have a stout severed neck where a head should be; accompanying journalist Tom Carrington later compared the sight to that of the headless ghost of Hamlet’s father.

No answer. He repeated his ultimatum as the figure marched on.

“I could shoot you, sonny,” came the eventual reply from an unnaturally tinny voice.

By now the figure was close enough that the police could plainly see the revolver it was wielding, with two more handguns holstered in readiness. They were baffled. Surely the gang were surrounded inside the Inn, so who could this mystery assailant be?

A bullet lodged itself into the earth between the encroacher and the police. The duel had begun.

Gunfire appeared to have no effect. The strange apparition recoiled from each shot as though being punched, all the while being heard to taunt and laugh as it returned fire. Even when the curiously square head snapped back sharply from a well-aimed shot, there was no end to the contest.

The policemen panicked. One concluded that they were duelling the Devil himself. Another theorised it was the Bunyip, a mythical Aboriginal creature believed to lurk in Australia’s swamps.

Diving for cover, Sergeant Arthur Steele noticed the human appearance of the gunman’s legs. Flushed with the premature rush of victory – and the realisation that this was no monster, but a man in armour - he took aim with his shotgun and fired twice.

The police removed the armour - which weighed 44kgs and was constructed from pieces of agricultural ploughs - and were amazed to see the face of Ned Kelly, leader of the Kelly gang.

He had been hit in the initial volley against the Inn, prompting him to leave the building from a back exit, somehow evading the cordon.

Despite having a perfect opportunity to escape, he had instead donned his armour and attempted to return to the Inn in support of his surrounded comrades. Wounded, he was captured and placed into custody.

By the time of his eventual walk to the gallows on November 11th, 1880, the tale of Kelly’s last stand had already assumed almost folkloric significance.

Indeed, Kelly’s grip on the popular imagination has not diminished with the passing of the years.

‘The Story of the Kelly Gang’, a 1906 dramatization of Ned Kelly’s exploits, is often regarded as history’s first ever feature length film. In 1970, Mick Jagger took on a rare acting role in the shoes of the outlaw, as did Heath Ledger as recently as 2003.

Kelly’s legacy is divisive. Where some remember him as a flawed yet romantic character in the vein of Robin Hood thanks to his outspoken condemnation of the treatment of Australia’s rural poor, others see in him nothing but a ruthless and bloodthirsty criminal.

A complex figure guilty of murdering several policemen, Kelly had also saved a young boy from drowning in a creek when he was aged only 11. The boy’s grateful family rewarded him a green sash in recognition of his bravery, which he was found to be wearing underneath his armour at the time of the climactic standoff in 1880.

Despite (or perhaps because of) Kelly’s moral ambiguity, he is arguably Australia’s most renowned historical icon.

And the Guardian can reveal he was also possibly one of Antrim’s furthest flung and best-known progenies.

James Quinn, Ned Kelly’s maternal grandfather, is recorded to have lived in Antrim until, together with his wife and his six children, he emigrated to Victoria, Australia, in 1839. It is not known, however, if that was the town itself or somewhere else nearby.

The regional significance of the island of Ireland in the Ned Kelly story does not end there.

Ned’s father, John Kelly, was descended from a family which resided in County Tipperary since 1800. Before 1800, the Kelly family tree can be further traced to County Wexford.

Ned Kelly’s great grandfather was among the ranks of the United Irishmen during the 1798 rebellion.

Upon the defeat of the uprising, he removed to County Limerick and settled near Clonmel, evading possible execution or deportation to Botany Bay.

Antrim Town Councillor Neil Kelly - who, as far as we are aware, is no relation! - has said he is ‘intrigued’ by Antrim’s link to Australia’s most famous desperado.

“I have a keen interest in local history and came across an article about Ned Kelly and his family connections to Wexford which also mentioned his maternal grandfather, a Mr James Quinn from County Antrim,” he said.

“The story of Ned and The Kelly Gang is of historical importance and has been depicted in many movies and features greatly in the exhibition at the Old Melbourne Goal where Kelly was hanged for murder in 1880 aged 25.

“It would be very interesting to find out if indeed there is a connection between Antrim and the Kelly gang of Australia.

“I am sure local historians will be hot on the trail to see if they can discover the family roots of James Quinn, grandfather of notorious bushranger Ned Kelly.”