Portrait of a forgotten artist 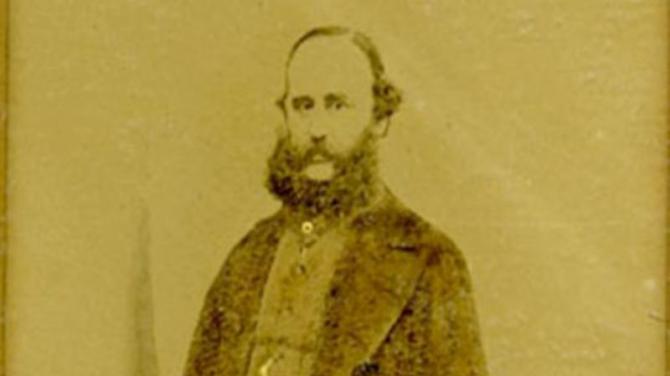 WHEN trying to count the souls sleeping under the sod of an old churchyard, it is often wiser to count blades of grass rather than headstones.

Take All Saints’ Church in Antrim, for example. It is flanked on three sides by graves, some dating back to the 16th century and others older still scrubbed clean by time.

It is estimated that more than 8,000 people were laid to rest in a site no larger than many back gardens.

There are marbled monuments to the great and good, men like Dr Alexander Irvine who rose from the aching poverty of his slum in Pogue’s Entry to dine with Royals and Presidents.

But most are unmarked, un-mourned and unloved.

Yet the forgotten dead are far from unremarkable . Indeed, among their number is a man who did arguably more than any other to catalogue for posterity the changing face of Ireland - only to be rewarded with decades of obscurity following his own untimely death.

That man was George Victor Du Noyer and this is his remarkable story.

He was born in Dublin in 1817 to French speaking parents of Hugenot descent and from a young age he showed precocious flair as an artist.

Though he had no formal training, his restless pencil - and his knack for finding a solid likeness in all that he drew, be it animal, landscape or fauna caught the eye of Irish-born antiquarian and artist George Petrie. Under his tutelage, Petrie carefully honed the young man’s skills and enthusiasm for natural history and soon he was astounding his peers with his painstakingly detailed work.

So when the Government embarked on a survey of Ireland, Du Noyer was enlisted to chronicle all that he saw - and he soon proved he was up to the task.

His notebooks from that period are filled with all manner of sketches that captured a country on the cusp of change. There were paintings too, most in vivid water colour, capturing for the first time the rugged countryside and its people.

Petra Coffery, a member of the Royal Society of Antiquaries in Ireland, told the Guardian that his captivating early work should have been enough to cement his reputation.

“Du Noyer did good service to the country in drawing small and large houses, churches, memorials and many archaeological sites which have since fallen into ruin or disappeared completely.”

He left the Ordinance Survey in 1840, and spent the next four difficult years surviving by selling some of his work for a fraction of its worth - setting the price in pounds and shillings at a time when many of his lesser peers commanded prices in guineas. After this unrewarding spell in the artistic wilderness, Du Noyer returned to the fold by taking up a Fellowship in Fine Art at the College of Saints in County Meath.

But he missed the freedom of the open road so in 1847 he accepted an offer to continue his work with the Geological Survey - and it was during this time that he became perhaps the most prolific Irish artist of the 19th century producing hundreds of images which are still used as reference points today.

He also traveled north, committing to paper places of note across County Antrim, from the mysterious Holestone, to the slopes of Slemish, to the majesty of the Giant’s Causeway.

He and his wife Frances and their five children moved to Antrim in 1867, and the artist was ‘very taken’ by the County Town and his family thrived. They took up residence in an address next to the old RIC Barracks at Castle Street and from that day on it became known as ‘The Frenchman’s House’ - ironic given that the man of the house was Irish through and through and spent his life celebrating it for future generations.

But this picture of domestic bliss would soon change.

They were buried together on January 4 in the graveyard at All Saints’. There was no headstone.

The man who had made such a towering contribution to his country left a small estate of less than £300, which the Royal Society tried to supplement by petitioning Prime Minister William Gladstone for a civil pension. The request was turned down.

Undeterred, the Society tried to ease the burden on Du Noyer’s family by purchasing a series of pictures at sums much higher than the market value.

But in time, the artist’s star continued to wane and he drifted into obscurity, his finest achievements unrecognised. Since the majority of his pictures were gathering dust in official government collections, he never really received the credit he was due.

In Antrim too, memories of the artist and his family soon clouded.

His residence continued to be called the ‘Frenchman’s house’, but decades after his passing most were not sure why. A century after his death it was almost as if he had never existed at all.

Until, that is, researchers revisited the archives and began piecing together his artistic and cultural legacy.

In 1997 Petra Coffey visited Antrim for the first time to see Du Noyer’s final resting place and to unveil a plaque in his honour in All Saints’ Church .

“His paintings so far have been known only to a few enthusiastic admirers and it is hoped that the quality of his work in different spheres will now become known to more,” she told the Guardian.

Those words were prophetic. Soon major exhibitions were organised, and the trickle of praise became a flood.

Decades after his death, this honorary Antrim man finally took his place among the greats of Irish painting.

‘With his vibrant water colours, stunning topographical sketches and painstakingly detailed geological maps, his life’s work is a testament to the possibilities of science and art sharing the limelight,’ wrote the Irish Examiner during a recent career retrospective. He has also been the subject of a BBC documentary series - ‘Great Irish Journeys: The Land of Du Noyer’- fronted by Martha Kearney.

And she believes the recent ‘rediscovery’is long overdue.

“He was an antiquarian. It was very much in his mind that he was documenting a way of life that was going quickly. He has done that regretfully,” she said.

It is often said in death all men are the same height, but it is equally true that some cast a much larger shadow.

His reputation restored, he now takes his place in the pantheon of Irish art.

It may have taken the better part of 150 years, but by George he has done it.