The day racial hatred finally boiled over into bloody murder 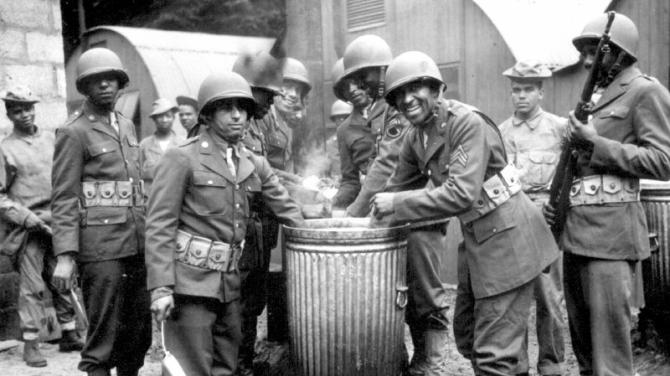 UNITY has never been so important in our lifetime - pulling together as a community is how we can battle the global pandemic in our own little way.

Our experiences have been compared to a war, day in day out.

We’re fighting an invisible foe, marauding ever closer to ourselves and our loved ones.

In the past the battle lines often seemed much more clear, with combatants raising arms over tangible things like politics or nationality.

And sometimes the race of the person holding that gun can be enough.

Antrim town is no stranger to racial intolerance.

Efforts are frequently made by campaigners, such as Seamus Davis in Springfarm, to help integrate migrant families more fully with the surrounding community, with varying levels of success.

In an age where connectivity is so readily available with the help of technology and self education, it seems there still those eager to despise differences, rather than celebrate them.

Racial divides are nothing new, of course, but they were once mercifully rare - until the American GIs came to town.

The catalyst for racial violence began in the spring of 1942, when US soldiers took their first steps onto Ulster soil. By May of that year, 37,000 GIs had landed - and by the end of the year, a mighty 120,000 yanks co-habitated in Northern Ireland.

The American soldiers were to be based in camps scattered across the country - including Antrim town.

The arrival of the Americans sparked excitement and intrigue amongst the locals, especially the young women of the town.

After all, this was their first time meeting a real life American outside of the silver screen - carrying gifts aplenty, and a diversity amongst the ranks that was little seen amidst the sleepy town.

Indeed, this would be the first time many Antrim folk came to meet people of colour.

Racial injustice has been an area of tension in America for as long as the United States have stood proud.

Segregation was the norm for the American soldiers - and Antrim man Stanley Young witnessed it first hand.

“The American soldiers arrived and after that came the black soldiers who were stationed in a different place down by the Lough,” he said.

“Like many other races they didn’t seem to mix. They were segregated.”

Tensions that were very much to the fore in America soon spread to Antrim.

Mr Young recalled hearing of an incident shortly after the GIs arrived in town, involving a white solder in a popular local bar.

“When the black man left the white man took his glass and threw it on the floor where it smashed to pieces. He did pay for it.

“But anyway a fight ensued and bullets were fired. They ended up in the wall of Joe Barr’s garage, and I know that much because I saw them myself.

“They did get into trouble, although I don’t know what happened to them. The story goes to illustrate that while segregation was a big thing in those days we didn’t know much about it.”

Whilst some may say they knew little about segregation, the racial divide was clear to see.

Former serviceman Jim Dickenson said the divisions between the troops had been an open secret.

“In Antrim itself, the barracks were occupied by Americans who had two camps on either side of the river, one Texans and one for the blacks,” he said.

“Obviously, the Texans hated the blacks and the boathouse had bullet holes in it from the two camps firing at each other.”

Mr Dickenson, who now lives in Manchester, went on to praise the Antrim townsfolk as hospitable, caring and kind.

“The people at Sandy Bay and in Antrim were always very friendly and I was amazed when we cycled down every other morning that everyone we passed shouted ‘Top of the morning!’ until we reached the Blue Café where we had a huge breakfast with fresh soda bread to finish off with plenty of butter.”

Whilst this may be true for the experience of the white GIs, it certainly was not for the rest.

A letter from an anonymous African American soldier sent to the Northern Ireland Government discloses the simmering racial tensions within the Antrim area, and a plea for tolerance in a land that was not home.

‘I am an American, coloured, soldier. My group of fellows have been stationed here in Antrim for nine months.

‘We are trying to do our part in the fight for freedom, but since we have been here we have met so much sergregation, prejudice and strife. Some time we doubt the allied cause.

‘We are stationed near Antrim, located in the town, at the establishments of Hall’s and Murphy’s. They are hotel owners. In visiting these establishments we have been segregated’.

The soldier revealed that segregation was being wilfully being enforced by some local.

WE ARE ALL HUMAN

‘To describe one incident, a friend and I visited Hall’s. They refused to serve us because we are coloured. Dear Sir, you and I both know that regardless of colour, we are all human.

‘We come to Ireland not because we wanted to, but we came to do our part in the war’.

The soldier noted how his welcome in Antrim had been in stark contrast to the welcome they had received in Carrickfergus, where they had been treated as ‘perfect gentlemen’.

‘The anatomy of the white man is the same as the dark man. God created all men as brothers, and my belief is that since we are all here in Ireland we should live as brothers and sisters and not enemies’.

The soldier went on to explain that the racist slang being thrown at him and many other African Americans had been an import to Ireland on the backs of white GIs.

‘We hate to walk the streets... because we are insulted. They use the words ‘nigger’ and ‘darky’. Those are two words we hate. Those words were brought here by the American whites.

‘The American whites taught the people those words in order to start strife and envy among the people and us’.

The letter ends with a plea for action to rectify the injustice.

‘Please try your influence to correct the people on these errors. Print it in the paper that we are coloured Americans not niggers or darkies’.

The tensions, however, were not calmed and instead reached fever pitch.

At around 9pm on Wednesday September 30 Commanding Officer Captain Edgar H Frederic and his men had gathered in the Mess Hall at the camp ‘where a picture show was about to begin’.

As the film unspooled, a GI burst in announcing that a man had just been shot, and three others had been detained by the Military Police.

Officers led by Lieutenant Lehmann raced to a jeep and made their way into Antrim, and on the edge of town they came upon the body of ‘a coloured soldier’, later identified as Private Jenkins, who had been badly injured but was laboriously breathing. Barely.

The officers then raced to the Nissen hut to secure the ammunition storage, occupied by the Company Commander.

Yet a number of black troops barged in, making it clear to their Lieutenant that his ‘life would be in danger’ if he tried to stop him.

After helping themselves, the race was on to intercept them before they used the bullets.

The group ‘knocked down’ the two GIs when one of them got up and began running.

A soldier noted: “The white soldier got up and was running when McDaniel’s shot him and said ‘I got him. I got him’.

The victim was Corporal Theodore B Janusz, who had sustained a serious rifle wound to his side, but was being tended to by locals in the cellar of a civilian house.

One of the local girls testified that she was warned ‘that they would put one in me if I didn't get home’.

McDaniel’s was found guilty of violating the 93rd Article of War, and was henceforth dishonourably discharged and sentenced to five years hard labour at the Federal Reformatory in Ohio.

This violence further staged the scene for further anguish.

The two men, one white and the other black, began a brawl which ended in knives being pulled.

The soldiers continued to fight until the Military Police fired shots to disperse the brawl - which revealed the African American soldier to have been fatally stabbed.

The war overseas had became a civil one, fought on a foreign land between men who were meant to be a band of brothers.

Over one million African Americans still signed up to fight in the Second World War. Many never saw home again.

Let us remember that every nationality and shade has fought for your freedom - and continue to do so in front line work.

I would like to conclude with a poignant note from the letter of the anonymous African American soldier, as I think he concludes this best.

‘Regardless to where a man is born or regardless to his colour, every man has his right to enjoy life here on this earth’.