Every town has its own Great War story to tell. This is Antrim's. 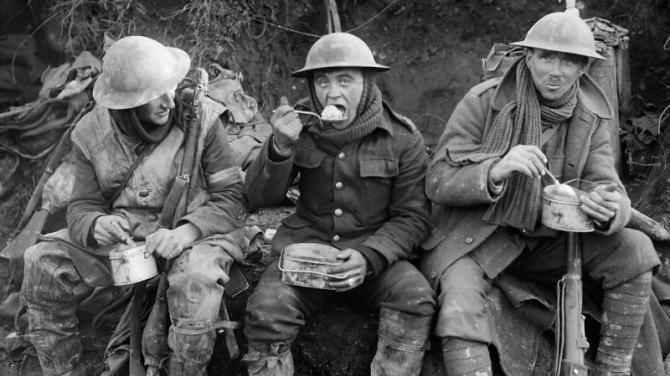 PRACTICALLY every town was touched by the horrors of the Great War - and Antrim was no exception.

Many ordinary men heeded their country’s call and joined the march from the farms and factories of rural Ulster to the killing fields of France - and ultimately to their graves.

Over 100 local heroes laid down their lives in the 1914-18 conflict, breathing their last at Messines, Langemarck, Cambrai, Mons, Ypres, Gallipoli and elsewhere along the Western Front.

The story of those epic battles has been written in the blood of that lost generation, and each stands as a lasting monument to towering human sacrifice, to awesome courage under fire and to the heart-breaking futility of war.

Alvin McCaig’s indispensable and definitive study of the impact of the war on locals, ‘Antrim in the Trenches’, may have started life as a planned Historical Society talk back in 2008 but it soon developed into a true labour of love.

The former Antrim Guardian reporter wanted to move away from the unimaginable scale of the tragedy and focus instead on the human face of the Fallen - to somehow paint the clearest ever picture of each individual soldier and examine how lives shaped in and around his home town came to end in a foreign field.

It was undoubtedly a daunting task, but after years of digging he finally published his opus. And the impact was immediate. Just last year, his research was used as the basis to add the names of those mown down to the town’s Cenotaph for the very first time.

“The Great War claimed 17 million lives and Antrim lost over 100 of its own,” said Alfie.

“Thousands of towns gave a rousing send-off to their departing soldiers and mourned for those who never returned.

“Each has its own story to tell. This is Antrim’s.”

And what a story it is. In 1914 when war broke out, men rich and poor joined the call to arms.

Private Robert Magill, whose family lived on Church Street, was among the first to sail to France with the British Expeditionary Force.

Viscount Massereene was on his way too, with the North Irish Horse.

Businesses in Antrim closed on August 8 to free locals to join the guard of honour as he left from the railway station. The Massereene Brass and Reed Band played ‘a number of patriotic airs on the platform, and as the train departed cheer after cheer was given for the King and for Lord Massereene’.

The army’s gain was Muckamore Cricket Club’s loss. Both Lord Massereene and Captain Stewart-Robinson had been due to play in that year’s Junior Cup final. The Moylena men lost but skipper John G Entwhistle was philosophical about it. After all his team mate had ‘much greater battles to fight’.

Lord Massereene was not the only member of the local aristocracy to join the march to war.

Captain Arthur O’Neill, of Shane’s Castle, became the first MP to die in the conflict when he was killed in action in November near Ypres. According to the Ballymena Observer, he died a hero leading his men in ‘one of the most gallant attempts to save a situation that has occurred since the war began’.

‘He was shot in the leg, and while being out received another wound, probably from shrapnel in the chest, and then begged his bearers to leave him and save themselves,’ wrote a fellow officer to Captain O’Neill’s grieving widow Annabel.

‘The regiments have every reason to feel proud of thei officers and men who have fallen, and of your poor husband most of all. He didn’t know what fear was’.

Lady O’Neill had been due to take part in the Antrim Technical College prize distribution the following week, but was forced to send her apologies. Instead, General Adair addressed the young people, and he urged all eligible young men in the district to join Kitchener’s Army. Seventy of them signed up that very day.

The 36th Ulster Division were on the march too. Around 300 UVF men from Antrim, Randalstown, Bush, Dungonnell, Crumlin and Muckamore converged on the Protestant Hall in late 1914. All were deemed fit to fight, with the honourable exception of Lakeview player James Scott who had ‘defective teeth’. A trip to the dentist remedied that and he duly enlisted with his brothers in arms.

“When war broke out, all us boys in Antrim went off in our hundreds and joined up. We were all friends and neighbours together,” said Jack Allen, whose family had moved from Creavery to Castle Street.

“It was a family affair. Everyone that was able volunteered.”

A distinctive feature of local recruitment was the large numbers of brothers signing up, many serving together in the South Antrims.

Joseph Wallace would fight alongside Alec and James. John and James Kernaghan stood shoulder by shoulder - as did Loanends brothers James and Joseph Goudy.

The Harkin brothers, Andrew and William, joined the Central Antrims.

Albert Whiteside stated that he was 19 years and three months old on his attestation form, despite being just 17. Matt McKelvey was underage too, as were Riverside youths Hugh Parker and Robert Bates.

Robert McCormick, from Kiln Entry, and his pal Beresford McCabe were just 16.

They all evaded detection, unlike Samuel Quigley who was just 14 when he joined, and 16-year-old Kennedy McAteer. They were discharged from the Royal Irish Rifles for ‘having made a mis-statement as to age on enlistment’.

Buglers were allowed to join at the grand old age of 16 and that’s what Fountain Street printer Isaac Moles did - except he was only 14-years-old and was rumbled before leaving Ireland.

These eager young men were undoubtedly devastated that they were unable to play their part - but at least they were spared the hellish reality of life and death at the front.

He was awarded the Distinguished Conduct Medal for conspicuous gallantry, though it could all too easily have been the Victoria Cross for his heroism at Thiepval on July 1 1916.

His citation read: ‘When the enemy heavily shelled his company and inflicted severe casualties, he carried all the dead and wounded on his back some 150 yards to the aid post.

‘During the attack later in the day he built with his own hands a barricade under enfilade machine gun fire and drove off a bombing attack. Although wounded, he continued to fight till exhausted from the loss of blood’.

Remarkable courage by any standard.

Sergeant Joe Cunningham, from Dunadry, also received the DSM for his roll in the ill-fated assault north of the Ancre.

‘He lay in hostile wire and kept up a continuous fire, himself accounting for at least seven of the enemy. Later he assumed command of his platoon, displaying great courage and determination,’ read his citation.

But the events of that day took a terrible toll. Sergeant Cunningham was hospitalised due to shell shock and was re-admitted another five times that year with the same debilitating condition. Physically he had survived, but the psychological scars were deep.

Rifleman John Millar, who fought with the South Antrims, also took part in the ‘big battle’ on July 1.

In a letter home, he wrote: ‘I will never forget the charge we made on that morning, early across No Man’s Land into the German trenches.

‘Our fellows fell very rapidly and yet those of us who weren’t hit ran on across and soon put the Germans out of their first trench at the point of the bayonet.

‘And again we charged them in their third line and fourth line and succeeded in taking these lines, but had to retire owing to no reinforcements coming up.

‘If I were to tell you about the awful scenes which I saw you couldn’t read them for the horror of it. If only the people at home knew and realised what our boys out there are doing and sacrificing for them they wouldn’t be in the mood for holiday making.’

Yet amid the carnage there was compassion. Rifleman J McKay captured a German prisoner who begged for his life.

‘He went down on his knees and prayed on me not to shoot or bayonet him as he had a wife and three children at home and that he had been in England until the war broke out. I had to take pity on him.’

‘Antrim in the Trenches’ includes many more testimonies from the local men on the front lines, many of them profoundly moving.

Alvin McCaig received no funding for this superb piece of scholarship, meeting the costs himself and giving away copies of the 320-page book for free.

His reward, he said, was to get the fruits of his labours into local libraries and schools to help future generations understand the sacrifice - and discover that the men who died were very much like them.

By giving a voice to Antrim’s dead, he has created a formidable document that will outlive us all.