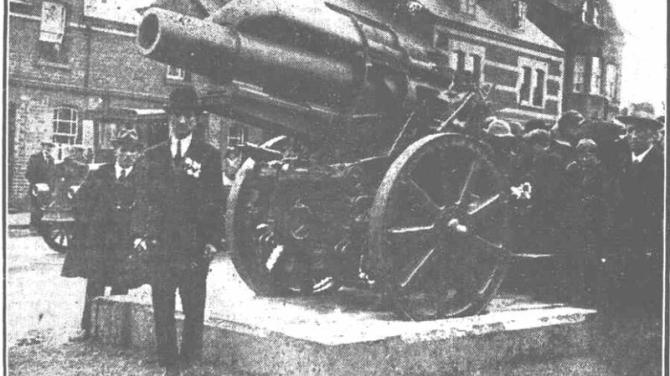 THEY were the Kaiser’s fearsome battering rams.

In 1914, their high explosive shells reduced the imposing Belgian fortresses of Liège to smoking rubble. Two years later, they rained continuous and random death on the intrepid French defenders clinging stubbornly to their trenches at Verdun.

Their presence was keenly felt by the 36th Ulster Division on the killing fields of the Somme when they were savagely mauled under their cacophonous hail.

During the First World War, artillery comprised the formidable backbone of the German army’s firepower, and is estimated to have been responsible for up to 70 per cent of Allied battle casualties.

And for Antrim, two such guns became unlikely - and short-lived - local landmarks.

In March 1924, two artillery pieces seized from German forces towards the end of the conflict were donated to the town by the War Office in recognition of the sacrifices of Antrim’s homegrown heroes and the close-knit community that mourned their loss.

They were symbols of victory that spoke of the insurmountable odds faced by the 258 local men who volunteered for duty on the Western Front, and the 42 who were cut down in their prime during the vicious bloodlettings around Thiepval, Messines and Ypres.

And they made for a fearsome sight.

The smaller of the two, a light anti-aircraft gun, kept silent watch over Market Square. The other was a hulking behemoth that, during the war, had been capable of lobbing huge shells up to seven miles away. This gun, a mighty 8-inch howitzer, was earmarked to take pride of place at the head of Fountain Street.

A contemporaneous account of the arrival of the German guns in Antrim, unearthed by local historians during a visit to the Public Records Office HQ in Belfast’s Titanic Quarter, captures a community flushed with post-war pride. It is clear from the excitable prose that the author had no intention of forgiving or forgetting the terrible casualties inflicted by the Kaiser’s forces.

They arrived in an Antrim draped in ‘Union Jacks and loyalist emblems’. A procession numbering in the thousands followed the guns from Castle Street onwards, led by the musicians of the Massereene Brass and Reed Band, the Randalstown Pipe Band and the Dungonnell Flute Band.

The R.U.C marched behind, alongside members of the ‘B Specials’ - ‘those gallant men who have done so much for the protection of our lives and properties since the commencement of the Irish struggle’ - and a contingent of local youngsters under the watchful eye of Scoutmaster Bob Moore.

Both guns, it was reported, had been diligently ‘cleared of all their Germanic rottenness, repainted and made to look respectable’.

However, for some townsfolk, the War Office’s gift was a confusing one. Why Antrim, and why a pair of cannons that had been serviced by enemy troops? Why commemorate the fallen by displaying the very weapons that had slain them in droves only six years earlier?

Mr Burrowes attempted to explain all. He accepted that ‘very many’ were puzzled by the striking new monuments, so he set out to ‘offer a few thoughts on what the guns were to them, and what they were not’.

“In the very forefront of his observations he would like to say, and to say it emphatically, that those German trophy guns were in no sense of the word and under no consideration a war memorial to their soldiers, either the living or the dead,” noted the reporter on the scene.

“Unfortunately they were in the sad position of being one of the only towns in Ulster who had up to the present erected no official war memorial to their incomparable soldiers.

“Turning to their guns, they might as well admit that some people did not like to see them and the question arose, ‘Why are they there?’

They were, he said, ‘Antrim’s share of the spoils of the great World War’.

“It was only natural that they should hate their materialism and their use, but they needed a far deeper vision. They wanted to see the bulldog grip and tenacity of the Briton in wresting those implements of war from their enemies.”

It was, he said, a funeral of sorts- putting the guns beyond use forever.

“Never again would their chambers be tenanted with the vehicles of death.”

The handover ceremony was presided over, on behalf of King George V, by Colonel H.A Pakenham. A veteran himself, he possessed a first-hand understanding of the rigours of combat as experienced by Antrim’s reconstituted soldiers. Indeed, a number of them had served under him in the 11th Battalion (South Antrim) of the Royal Irish Rifles.

“He was there for some time with them,” the reporter added, “and he knew what they were - cheerful in adversity, taking everything as it came as if it was in the day’s work; always smiling and, above all, extraordinarily fine fighters.”

Under his command, the 11th Battalion participated in the deadliest single day in British military history - the first day of the Somme Offensive on July 1st 1916, during which some 57,000 British troops were killed or maimed. Going over the top at dawn and running the punishing gauntlet of No Man’s Land as part of that disastrous advance, the German guns exacted a bloody toll from the sons of Randalstown, Kells, Ballymena and Antrim.

Following this hideous baptism of fire, the luckless Antrim men of the 11th Battalion may as well have been plucked from the frying pan and plunged into the fire. The following year they served at Messines, where the mines detonated beneath the German trenches were so earsplittingly loud their blasts could be heard all the way from London.

Only a few of months later, they waded grimly into the bogged down, muddy mire of the infamous Battle of Passchendaele in Flanders. Shortly thereafter, the Antrim men bore witness to the first mass use of tanks in warfare during the Battle of Cambrai.

He paid tribute to them in his address, and spoke of his pride in handing over the ‘dead emblems of a dead empire’.

“It was those guns and guns like them that day and night were pouring their shots at their devoted heads, and very unpleasant shots they were, but in spite of them they won through and the guns that day were taken from those who tried to stop them but did not succeed.

“He hoped they would remain there for generations to come as emblems of what the might of Great Britain was, and as mute witnesses to the great German defeat and ultimate rout.”

It was, he said, no less than the men of Antrim deserved. Pakenham further added that it had been ‘an honour’ to command them, and that his enduring love of that fighting band of brothers was his ‘lasting remembrance of that Great War’.

In closing, he hoped that the town’s children would ‘treat them with due respect and not make climbing places of them’.

“Instead, treat them as something that was almost sacred, because from their mouths went projectiles that killed many of their friends and relations and those that were loved by them,” he said.

In time the guns would become climbing frames, but certainly not that day. The patriotic fervour was already high as the Massereene Band broke into a rousing chorus of Rule Britannia as Hugh O’Neill, the local MP and Speaker of the new Northern Ireland Parliament took to the platform.

He said that the guns should be a monument to the lives lost - and a reminder of what could be at stake if countries took up arms again.

“Let’s hope…. that these guns commemorate a future era of greater peace among the nations,” he said.

He acknowledged how the same weapons had ‘poured their deadly avalanches’ onto Allied trenches on the Western Front, and suggested that such evocative relics from Europe’s blood-soaked battlefields should imbue the town of Antrim with a justified sense of pride.

“It is an honour to the town to have these guns, and an honour well deserved,” he said.

The reporter on the scene described the handover ceremony as an ‘inspiring occasion’, adding: “He hoped that all of them, men, women and children who had the privilege of being there that afternoon would never forget what the occasion commemorated - the victory of the Allies in the Great War, a victory of right over might, of democracy over absolutism and a victory to which he hoped and trusted would conduce to the eventual peace of the world.”

For all the jingoistic jubilation, the sombre undercurrent to the ceremony was palpable.

“One could not help, at a time like that, thinking of those who went to war and never came back,” the unnamed reporter continued.

“(Mr O’Neill) was sure that there were many there that afternoon whose pride at the acceptance of these guns by the town was mingled also with feelings of memories not untinged with sorrow for those who were dear to them and who would never come back.”

The guns, therefore, were more than mere spoils of war or communal bragging right. They were a powerful reminder of the gaping hole torn into the community when those cheerful, brave young men marched off to that terrible clash of empires.

The sacrifice was then underlined when Antrim man Sam Hannan - who had served in the Royal Irish Rifles in wartime and had won the Carnegie Medal for gallantry helping people from the fire at Antrim Castle two years previously - stepped forward to lay a wreath at the sleeping gun.

The final speech of the afternoon came courtesy of Charles McKeen, with comments that, in retrospect, were eerily prophetic.

“In a very few years these fearsome guns will be out of date and if war breaks out again whole countries and towns and communities will be wiped out of existence as by a flash of lightning,” he said.

“Therefore, it behoves all politicians and rulers to see that peace is maintained.”

Such optimism in the finality of the Allied victory soon dissipated when the war to end all wars gave way to the peace to end all peace. By 1939, the clouds of war were once again looming and in time Antrim’s symbols of peace were conscripted to help the war effort. Ironically, they were melted down for munitions to rain down on German heads.

Today, two small cannons, donated by Greenmount College, mark the locations where their larger German cousins once stood. It is difficult to visualise the field gun that once presided over Market Square, and bizarre to think of how a seven-tonne steel colossus once called Fountain Street home.

Nonetheless, had they survived, the German guns could have made for distinctive focal points for remembering the local men who endured their shot and shell in the hellish trenches of the Great War.