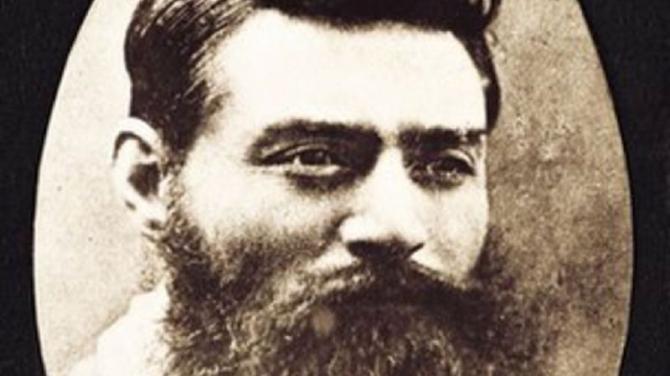 WORKING with family historian Nick Quinn from Australia we have discovered a long lost and important link between Ned Kelly and Northern Ireland which adds to the story of immigration and the North of Ireland.

Together we have finally established that Ned Kelly’s mother was born in a ‘labourers’ cottage’ between Antrim and Ballymena.

In 1770 a Patrick Quinn is noted on the flax growers’ list residing between Bushmills and the Giant’s Causeway. Patrick Quinn married Mary McGeer and they made their home at what is now Ireland’s most visited tourist location.

Patrick and Mary had a son called James Quinn in 1803 at their farm in the shadow of the Causeway. It is unknown if he had any siblings.

James did not stay on the small family farm, however, and moved to labour between the towns of Ballymena and Antrim.

James married Mary probably in Antrim town - but all was not rosy for this family.

They were staunchly Catholic and members of the lower labouring class.

Daughter Ellen was born between the towns of Ballymena and Antrim in 1832 and her birth was later registered in the county town.

Ellen was the fifth child born to James Quinn and Mary and later nicknamed ‘Little Nell’.

Living on a solitary wage and a diet of oatmeal, potatoes and often going hungry they made the choice to explore the opportunities arising in Australia.

In 1839 New South Wales had founded a system of assisted emigration with the British Government. Many of the Australian districts were isolated and in dire need of labour and trades.

At his first opportunity James volunteered to emigrate with his eight children to ‘improve their position’.

They sold everything they owned and set sail.

So many relocated to Australia this way - and it would have been perfectly normal if historians would have never heard of Little Nell’s family ever again.

Often a whole family emigration would be similar to a death in the family. They simply disappeared forever.

The Quinn family made the 16,000 mile, three week journey from Newry to Liverpool and on to Australia on the 939 ton ship called the England under Captain John Thompson. The ship carried 367 bounty emigrants.

James Quinn found work outside Melbourne at a place called Moonee Ponds Creek. He soon moves to Broadmeadows where he rented a huge 1,280 acre farm.

They then move again to Merri Creek where they rented another farm, enjoying the riches of their improved situation.

The year 1850 probably proved to the high point for James and his fortunes. From then on he would find himself up in the dock on more than one occasion.

In 1850 Ellen had been in Australia for only nine years when she met John ‘Red’ Kelly.

Ellen fell pregnant and they got married at St Frances Catholic Church in 1850.

Red and Ellen would remain small farmers and subject to police investigations - their condition not much better than if they had remained in ‘the old country’.

So who was Ned Kelly?

Edward (Ned) Kelly was born in 1854. He grew to become one of Australia’s best known outlaws - often described as the Robin Hood of Oz.

At the age of just 25 he was hanged for his crimes.

Ned’s criminal life started early. In 1869, when he was 14, he was arrested for allegedly assaulting a Chinese man and in 1870 arrested as a accomplice of a bushranger. Both these charges were dismissed.

Fitzpatrick claimed that Ned shot him in the wrist. Ned’s mother Ellen was arrested for aiding and abetting an attempted murder.

Ned and Dan went into hiding, and were later joined by Ned’s friend Joe Byrne, and Dan’s pal Steve Hart.

In October 1878, Ned, Dan, Joe and Steve headed for Bullock Creek, where they hoped to earn enough money to appeal Ellen’s sentence by running a whisky distillery.

When they arrived they learned that four policemen were planning to track them down.

The outlaws ambushed the police camp and Ned killed two of them. From that day on they were known as ‘the notorious Kelly Gang’.

They now went on to rob sheep stations, banks and take possession of a police station. The award soon increased from £200 to £8,000 - dead or alive.

For two years the gang evaded arrest. Their last act together was to take possession of the Glenrowan Inn, taking 60 people hostage.

The police surrounded the Inn. Ned’s response was audacious - and it sealed his name in local lore.

Dressed in a home made suit of armour, he confronted the startled officers in the gloom. They opened fire but the bullets bounced off the outlaw until one found a chink in the armour on his leg.

Incredibly a wounded Ned managed to escape to the bush. He was soon arrested and sentenced to death.

Ned’s sister, 17-year-old Kate Kelly, with her sister Maggie and Tom Lloyd, applied for help through the Society for the Abolition of Capital Punishment. With four members of this Society she went to see the Governor to beg for mercy for Ned. A petition to spare Ned’s life received over 30,000 signatures.

To no avail. On the 11th of November 1880 Ned was hanged. His last words were: “Ah well, I suppose it has come to this.” Other prefer to believe he uttered: “Such is life.”

The discovery of a concrete link back to County Antrim adds a different perspective to the Australian experience in Northern Ireland - and post-COVID it could herald a tourism dividend.

“This is another example of the great people that live in Northern Ireland and the rest of this small island that spend a lot of time researching and sharing links like this with the rest of the world,” he said.

“First of all, I would like to congratulate Stephen McCracken for sharing his discovery of Ned Kelly’s connection with the causeway coast.

“These sort of discoveries enhance the experience of tourists to the area and it’s great material for a tour guide to highlight these connections.

“We have so many interesting connections and these recent revelations should be shared not only to the Australian market but added to the other fascinating links we have to the rest of the world it will no doubt add to the tours that I take as a guide along the famous Causeway Coast.

“Tourism is so important to the economy and with the recent setbacks to our industry this new information will certainly go some way to kick start our industry.

“We have great storytellers in this part of Ireland and guides will certainly bring stories like this to life.

“I worked for six years at the biggest visitor attraction on the island of Ireland Titanic Belfast and was privileged to greet guests from all over the world and know stories like this enhance their experience in Northern Ireland.

“In recent years interest in tracing Irish ancestry is growing and a few years ago we had ‘The Gathering’ which was so popular and hope discoveries like this encourage our tourist bodies to think of marketing this in their advertising campaigns.”

This has been echoed by NI Tour Guide Donal Kelly who regularly leads walks to historic places of interest in Antrim.

“I am delighted Stephen McCracken has discovered that Ned Kelly’s mother Ellen McCann was born in the Antrim area,” he said.

“I think this will help boost tourism in the Antrim and Newtownabbey Council area especially with Australian visitors.

“I have engaged with many Australians since beginning my role as part of the casual visitor experience crew at Titanic Belfast in 2012, and as the story of the ‘Kelly Gang’ is so embedded in Australian folk culture, a visit to the birthplace of Ned Kelly’s mother could with careful marketing become a ‘must do’ for Australian visitors to NI.

“Stephen has also been undertaking extensive research into the 1798 Battle of Antrim and the United Irishmen Rebellion and his new book on the battle and the involvement of local people in the failed uprising will be a fascinating read.

“As a person born and bred in Antrim it is only in recent years that I have discovered the monumental events of June 1798 in the Antrim area and realised the significance of the Battle of Antrim, one of the major military engagements of the United Irishmen Rebellion in Ireland, an insurrection that would result in the 1801 Act of Union that still defines the political makeup of the United Kingdom.

“I therefore, with the help of Stephen, hope to promote tourism in the town by continuing to offer walking tours of the historic town centre of Antrim which still uniquely has some of the built heritage from the era.

“We also plan to campaign for a Battle of Antrim visitor centre and a fitting memorial to all the casualties of the conflict, as interest in the events of the 1798 rebellion continues to grow all over Ireland and beyond.

“We feel this could further enhance the area’s tourist offering.”