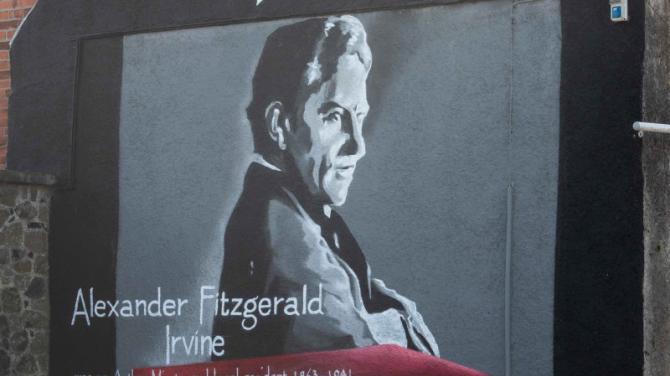 MORE than eight decades since his death, Antrim’s most famous literary son has returned to the place where his remarkable story began.

Alexander Fitzgerald Irvine was born into the aching poverty of 19th century Antrim.

Son of James and his beloved mother Anna, he was born in 1863 and was raised in Pogue’s Entry.

A striking new mural now towers over that humble abode, which became famous with the publication of his masterpiece ‘My Lady of the Chimney Corner’.

The family had few material possessions in their meagre home, but Anna’s strong social and religious convictions were her enduring gift to her 12 children.

Which was just as well, as they had precious little else. Dr Irvine later recalled the brutal reality of an impoverished childhood.

“The world in which I first found myself was a world of hungry people. My earliest sufferings were the sufferings of hunger - physical hunger,” he said.

“It was not an unusual sight to see the children of our neighbourhood scratching the offal in the gutterways for scraps of meat, vegetables and refuse, Many times I have done it myself.”

He was soon put to work, adding to the family coffers with stints as a newspaper boy, a stable hand and even a ‘scarecrow’ - but there was an adventurous spirit that yearned for more.

After a brief stint in the army, he returned to his studies and traveled to the United States where he served as a Pastor in Nabraska, Iowa, Connecticut before preaching at the Church of the Ascension on New Yor’s Fifth Avenue - dubbed ‘the millionaire’s church’.

But he proved to be equally at home with the slum-dwellers of the Bowery. His earlier experiences taught him well.

For a short time he even turned his hand to acting. In 1913, the very same year his magnum opus was published, he starred in a self-penned play, ‘The Rector of St Jude’s’. You could take the man out of Antrim, but you could not take Antrim out of the man!

He also saw service in the Great War, reputedly at the request of Lloyd George himself. He was the Chief Morale Raiser for the British Army in France from 1916 to the end of the war - and later received thanks from none other than King George himself.

He continued to write, of course, and his works sold well on both sides of the Atlantic.

He returned to Antrim in the 1930s to visit the marble slab erected over his parents’ grave in the grounds of All Saints’ and to pay an emotional return to Pogue’s Entry. The building had been purchased in 1934 so it could be preserved for future generations.

The Antrim man died in Hollywood in March 1941, but his ashes were brought ‘home’ in 1946 to be interred with his parents.

The council are glad that Irvine now has pride of place where those precious early chapters of his life were written.

“Pogue’s Entry is one of the most historical sites in Antrim. The mural creates a striking visual impact at street level of Dr Alexander Irvine and the setting for his most famous story.

“It marks the work of Alexander Irvine and the historic corner of 18th century Antrim, Pogue’s Entry Historical Cottage, which is his childhood home.

“The Council wants to connect people in a visual way to their heritage, and give a real sense of place. We have also created an opportunity for visitors to step back in time and learn about our history and heritage. It is anticipated that Pogue’s Entry will be a key attraction in future heritage itineraries for both walking tours and coach parties in the Borough.

“The artist, Glenn Black from Blaze FX was appointed under the guidance of the Antrim Town Team which comprises local businesses and councillors and represents an excellent example of business and the local community working in partnership.

“The project was funded at a cost of £1,400 by Lidl as part of their corporate social responsibility commitments.”