How Randalstown traders rallied to 'do the business' during COVID-19 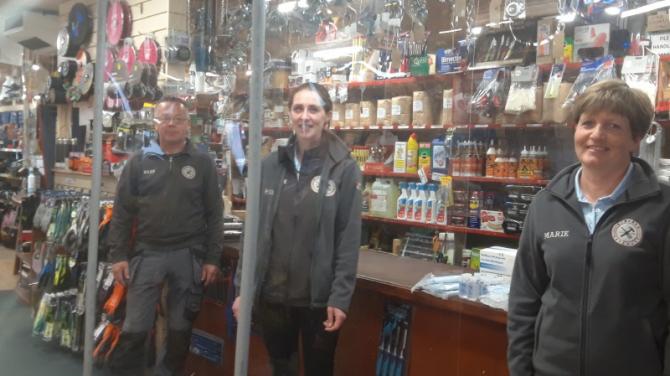 WHEN the Dalai Lama said ‘I find hope in the darkest of days, and focus on the brightest’, he could well have been describing the efforts of the town’s essential businesses and the local community response.

As the lockdown began, the atmosphere in Randalstown was decidedly eerie.

For the first time ever, we queued outside shops which we’d always entered without a second thought.

We sidestepped others on footpaths and practically jumped when someone came towards us in shop aisle.

It was left to the essential businesses to keep the community going. And keep it going they most certainly did.

As with the other traders, who were classed as essential businesses, Kearneys’ owner, Oliver Kearney, had no contingency plan in place for a pandemic but, once lockdown was announced, he and his staff know that they had to act – and act quickly!

“Obviously we were all working in the dark,” he said.

“But ‘have to’ is a wonderful thing and so we immediately came up with a response to these new conditions and implemented them as quickly as we could.

“The first aspect we addressed was that of limiting any spread of the virus – for both customers and staff.

“We installed screens around all of the tills and created an entrance and exit rather than having two doors which could be used for both.

“We also placed one member of staff at the entrance and they were implemented the ‘one in, one out’ system, and ensured that everyone, who entered the shop, had sanitiser sprayed onto their hands.”

Oliver and his team were well aware of the fact that many of their customers – particularly the elderly and those with underlying health conditions – would not be able to visit the shop, so they knew that their delivery service was now going to be instrumental in keeping the community going.

“We had a massive influx of email and telephone orders and so we had to organise ourselves quickly. Many of our staff were utilised for collating orders for customers and we were fortunate that local sports clubs were able to offer volunteer drivers for deliveries.

“There’s no doubt that things have calmed down now - for both staff and customers. The first few weeks were extremely stressful for everyone and the stress and anxiety were practically palpable in the store.”

This being Northern Ireland, it was perhaps unsurprising that off licences were deemed ‘essential businesses’, but, as with every other off licence across the province, Patrick Magill and his staff at The Vintage wanted to continue to provide a service for the local community.

“I took the decision to close the day before lockdown was implemented as I didn’t think that it was safe for either staff or customers,” he said.

“I was, of course, worried about how it would affect the business, but the health of my staff and customers was more important.”

Once lockdown had happened, and the Assembly had announced that it was illegal to operate from the shop door, Patrick and his staff decided that a delivery service, marketed through social media and with zero human interaction was the solution.

“The delivery service really did kick in quickly,” said Patrick.

“Initially, it was really quite chaotic, mainly because shops weren’t allowed to open - but I knew that I had made the right decision.

“From the outset, we were doing 200 deliveries a day, which was quite an achievement.

“We had a van for the delivery service that we already provided pre-lockdown, but there was no way that we could meet the demand with just a van, and so we used local taxi drivers, who had lost a lot of their trade.

“We gave them the delivery charge and so The Vintage didn’t make anything on the delivery, but that was of no concern during these times.

“We simply wanted to service our customers and were able to help self-employed drivers in the process.”

When lockdown was announced, Liam and Rose Hurrell from McManus Hardware knew that they would have to find a way to service the local community without endangering either their staff or their customers.

“We knew from the outset that we fell into the category of ‘essential businesses’,” said Liam.

“So we took the lead from the government with regard to safety measures that we could adopt.

“One of the main problems that we faced is that, due to the nature of our business, customers are inclined to walk about the store touching various products.

“It was clear that we couldn’t have this happening. It was also clear that it was going to be too difficult to manage customers coming in and out, and so we decided to close the front door and serve everyone from the gate.

“At the beginning this was a bit of an operational nightmare as we had to run back into the store for every product but, on the plus side, we’re probably all fitter than we’ve ever been!’ he laughed.

Local butcher, Thomas Duffin, was also concerned about how he and his team could deliver a quality service while keeping the safety of his customers and staff as the number one priority.

“We wanted to make sure that our customers, who were vulnerable or self-isolating, weren’t left without supplies,” he said, “so we set up a delivery service and offered a pre-order and collection facility to reduce queuing times.

“Within the shop itself, we reduced the number of customers in store at any one time to ensure social distancing and we also changed our opening hours to enable us to prepare stock.

“I definitely think that the good weather helped everyone, not only in terms of keeping spirits up a little, but also in terms of the fact that people were able to stand outside in good weather.

“It is something we have to be thankful for.

“I’d also like to thank our customers for their patience when queuing and a big thanks also to all of our staff, who worked extremely hard throughout this time.”