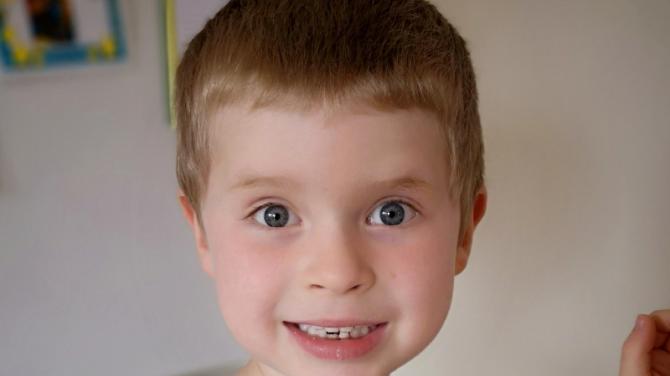 THEY say you don't truly know fear or worry until you become a parent.

It’s something every mother or father will resonate with - that ferocious love which would see you move mountains for your child, doubtless that their little lives are your everything.

But what if the day came when you had to accept the utterly terrifying reality that everything you are may not be the saving grace that your child needs?

I faced every parent's worst nightmare when I was forced to confront that very real yet somehow completely unimaginable possibility last week.

I ran into the Emergency Department at Antrim Area Hospital, clutching my stiff and unresponsive son to my chest, begging for someone to help me.

Barely in the door, a nurse appeared by my side, grabbed James and ran with him to resus where countless medical staff descended on the bed.

ED staff, ICU medics, paediatric consultants, nurses, registrars, anaesthetists - in the flurry, I regret that I don’t know all of their names but what I do know with absolute certainty is that I owe them a debt that no amount of clapping on doorsteps can ever repay - the life of my son.

At one point, no fewer than a dozen of Antrim Area’s finest were focused on my little boy and it was in that very moment that I realised it was true - not all heroes wear capes.

And while I've never been as scared in my life when they told me ‘your son is stable but he’s very sick’, I took comfort in the fact that I knew he couldn’t be in safer hands.

The ED team and their colleagues from across the hospital worked tirelessly but when different medications all failed to end the seizure, they took action in his best interests as they intubated and ventilated him.

We were led away from resus while this took place but were kept constantly informed as multiple staff members sought further information about what preceded the episode as they tailored their care.

We were brought back in to sit with him as a specialist paediatric intensive care transport team made their way down from Belfast and staff warned us how distressing it would be to see your child, who suddenly appeared so much younger than six, hooked up to machines with countless tubes and wires covering him.

And they were right, it’s a sight you can never un-see but the power of that scene is matched only by the enduring image of the dedication, professionalism and unwavering compassion of the staff who remained calm and ever present at his bedside.

While we are under no illusions about how very ill he was, we are beyond grateful that ours is a story with a happy ending.

James was moved up to intensive care at the Royal Belfast Hospital for Sick Children and staff there gave us further confirmation that Antrim ED had managed his care exceptionally.

He has begun to recover well and is back at home where I’m quite sure, like any six-year-old, this epic tale will serve as leverage for ice cream and screen time for the forseeable.

We are hopeful that there will be no recurrence but have been trained in what to do if it should ever happen again.

We also have no reason to be unduly concerned about the possibility of any lasting damage and there can be no doubt that we have Antrim’s incredible ED team and their colleagues to thank for that.

From the nurse who ran with my son, cradling him as if he were her own; the senior ED staff member who mask ventilated him, the anesthetists who handled his sedation and watched him like hawks and the consultant who appeared at our side with cups of tea - proving the true depth of the vocation that called each of these exceptional individuals to their roles.

In recent months we have all applauded our healthcare workers, recognising the invaluable role they have played in this unprecedented war against a global pandemic.

On top of this seemingly insurmountable task, they are still delivering minor and major miracles every single day.

It is human to complain and to expect better but it should also be in us to acknowledge excellence and show gratitude and - pandemic or not - Antrim’s frontline staff are truly extraordinary.

Words will never be enough for what they did but I will never forget their actions and care in our hour of need.