Antrim lose clash of the minnows 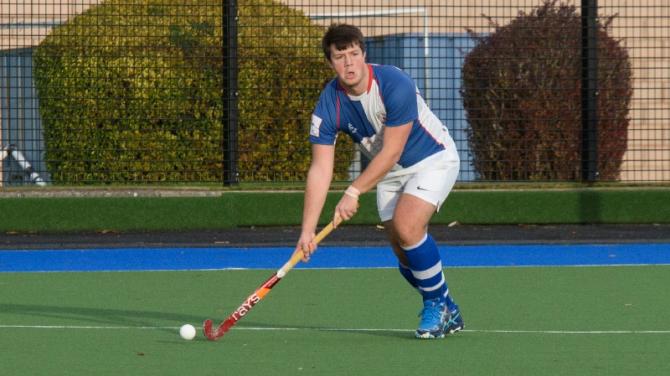 ANTRIM returned to league action on Saturday when they entertained Donegal visitors Raphoe at the Paddy Marks Arena in a vital bottom of the table match.

Raphoe won their first penalty corner in the third minute and from the switch the ball was driven wide.

There was little between the teams as they struggled to gain the upper hand with both missing chances.

Then in the 19th minute a bad Antrim defender’s hit out was intercepted and the ball was switched to the left of circle.

The winger easily played the ball past another defender into the goalmouth where James Wilson slammed it into the net to give Raphoe the 1-0 lead.

Antrim won their first penalty corner in the 21st minute when the ball from Andy Linford’s pass into the circle hit a defender’s foot.

The Raphoe goalkeeper saved Thomas Allen’s drag flick but the ball hit a defender’s leg and another corner was awarded but this time Dean Wilson shot wide.

Another bad defender’s clearance was intercepted in the 23rd minute and the ball played across the goalmouth where a Raphoe forward glanced the ball wide of the post to give Antrim a lucky let off.

Minutes later another Raphoe forward hit the post from a snap edge of circle shot and at the other end Allen’s pass into the circle was just too long for Wilson as it rolled over the line.

Another Antrim penalty corner was wasted as the striker dithered before trying to shoot and another Wilson pass was just too strong for Alex McBride to reach as it flew across the circle.

Following another bad hit out by an Antrim defender, Raphoe won a disputed penalty corner after a collision in the circle and only from a hectic scramble in the goalmouth was the ball cleared away as half time arrived.

Straight from the restart Raphoe won a penalty corner but goalkeeper Andy Heatley confidently cleared the ball away.

It was quickly played into Raphoe’s circle where Allen’s shot hit a foot to win another penalty corner.

The ball was switched right to Ryan McCrea but his feeble shot was cleared away.

From another 43rd minute Antrim penalty corner attempt the ball was deflected high over the cross bar.

From increasing pressure on the Raphoe defence Antrim won a couple of penalty corners in the 48th minute. The first attempt was cleared by the Raphoe defence but from the second one Wilson drove the ball against the backboards to give his team the deserved equaliser.

For the next 20 minutes Antrim dominated the game as they pressed forward to get the winning goal.

A player from each team was sin binned after a clash in the Raphoe circle.

A Johnny McMeekin interchange with McCrea saw Curtis Murray shoot wide when well placed and in the very next attack Murray should have scored but the goalkeeper easily blocked his tame shot.

Another Raphoe player was sin binned for a deliberate foul outside the circle but McMeekin’s penalty corner drag flick was saved by the goalkeeper.

Then Wilson’s pass found Murray free in the circle but once again his poor shot was saved.

A quick Raphoe break out and shot brought a good save from goalkeeper Heatley.

The ball was cleared to the other end but McBride’s shot went disappointingly wide.

The hit out was intercepted and the skilful Wilson broke into the circle to see his fierce reverse stick shot saved by the Raphoe keeper.

The pressure was on the Raphoe defence and a cross from the right was missed by at least three Antrim forwards before McCrea shot wide when well placed in the next attack.

With less than two minutes remaining from a quick breakaway attack goalkeeper Heatley saved a strong edge of shot but Raphoe’s Tom Orr reacted first to flick the ball high into the net to clinch the 2-1 victory.

Antrim had enough chances to comfortably win this game and their forwards must improve by being sharper, quicker to the ball and more accurate with their shooting as they press for goals.

This week the team has a home game against Ballynahinch in the last of their Linden Cup round robin matches, starting at 2.30pm.