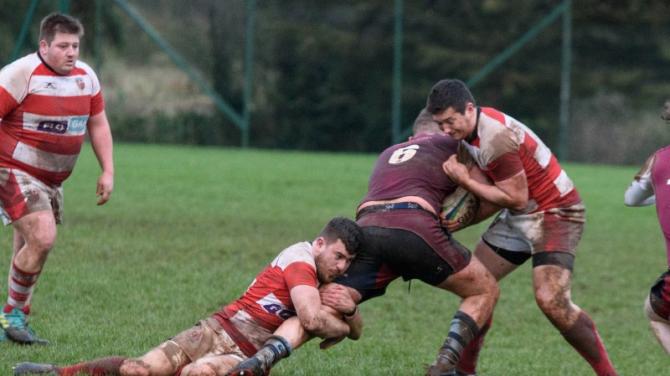 RANDALSTOWN Second XV played their first home game since the opening game of the season when they entertained their Enniskillen counterparts at Neillsbrook on Saturday.

Their visitors came into the game with just a single defeat and sitting in second place in the table but left with a loss after Randalstown’s 36-0 victory.

Randalstown’s third consecutive bonus point win, as well as a cup victory, though did come at a cost as first loose head prop Neil Foster had to go to hospital with a broken nose after 20 minutes, before tight head prop Pedro Conceicao unfortunately joined him at Antrim Area when he suffered a severe leg break in the 65th minute.

All at Randalstown Rugby Club wish Neil and Pedro speedy and full recoveries and hope to see them back in action as soon as possible.

Randalstown played down the slope and with a slight breeze at their backs in the first half and despite making a good start, the game was scoreless after 10 minutes. However, following a spell of sustained pressure close to the Enniskillen line, scrum half Chris McGoldrick sneaked over from a couple of metres to make the score 5-0.

This seemed to settle Randalstown as they quickly scored their second try. Following a strong run by number eight Danny McGrandless, he found flanker Johnny Fullerton in support just inside the Enniskillen half. With just a single defender to beat, Fullerton raced away to touch down under the posts. Full back Ben McKnight added the extra points to put Randalstown 12-0 ahead after 17 minutes.

After 30 minutes, the homeside got their third try when McGrandles barged over from close-range to underline their dominance at this stage. Again McKnight added the extra points to increase Randalstown’s advantage to 19 points.

Then on the stroke of half time, Randalstown sealed their try-scoring bonus point when inside centre Ryan O’Dea strolled over virtually unopposed after a number of phases weakened the Enniskillen resistance. McKnight’s third conversion made the half time score 26-0.

To their credit Enniskillen started the second period the stronger and only some stout Randalstown defending kept them out. After that, however, it was Randalstown who grabbed their fifth try when McGrandles finished off another fine series of phases to barge over to move his side 31-0 ahead.

When Conceicao picked up his unfortunate injury, the game moved to the adjoining pitch as the ambulance was called. Not surprisingly following the lengthy delay it then lacked the intensity of before but there was still enough time for out-half Matthew Turner to slice the defence for the game’s final try that made the final score 36-0.

This was a fine team performance that will need to be repeated this week when third-placed CIYMS Second XV are the visitors to Neillsbrook. The Belfast club defeated Randalstown in Belfast when their opponents’ backs proved to be the difference between the sides.