Vivien is a true Unsung Hero 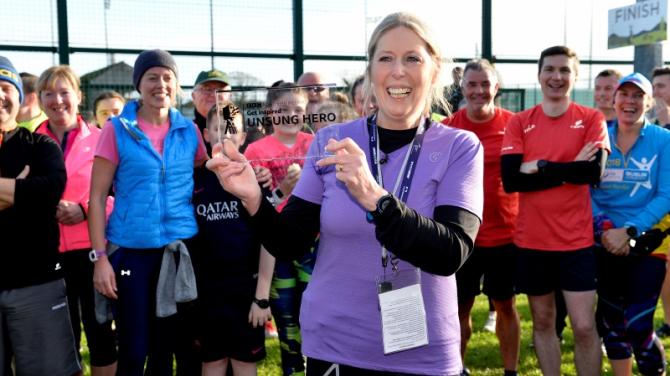 A RUNNING coach, volunteer and coordinator from Nutts Corner is the winner of this year’s BBC Get Inspired Unsung Hero Award for Northern Ireland.

Vivien Davidson helps runners of all ages and abilities – whether it’s encouraging them to take part in a parkrun for the first time or set personal goals in marathons.

She trained to work as a guide for athletes with visual impairments and encourages fellow runners to become involved too.

The BBC Get Inspired Unsung Hero Award honours those people from the world of grassroots sport and recognises those who, on a voluntary basis, go the extra mile contributing to sport in their local community.

Vivien volunteers with various groups of runners and organisations every Monday, Wednesday, Friday and weekend - organising parkruns and coaching sessions.

She volunteers with Jogbelfast and she started the Carrickfergus parkrun in 2014 and has been the event director ever since – including processing the results and managing the volunteer rosters.

‘She’s hugely motivational…’; ‘If it wasn’t for Vivien I wouldn’t be a runner…’; ‘She really is like a wee super hero. I just don’t know how she does it…’; and ‘Her time’s just given to everybody else but her…’ are just some of the many personal tributes that have been paid to her.

Now, Vivien will represent Northern Ireland among 15 regional Unsung Hero winners from across the United Kingdom.

The overall UK winner will be announced during the BBC Sports Personality of The Year Awards next month.

Returning for its 16th year, Unsung Hero 2018 seeks out volunteers who are inspiring people of all ages to get up and get active.

Finalists will be drawn from Scotland, Northern Ireland, Wales, and each of the 12 English regions, with the winner receiving their award at this year’s ceremony live on BBC One.

“Giving up her time, doing something she loves and inspiring others to take part and enjoy running makes her a worthy winner.

“Congratulations to Vivien and we wish her the best of luck for the overall award.”