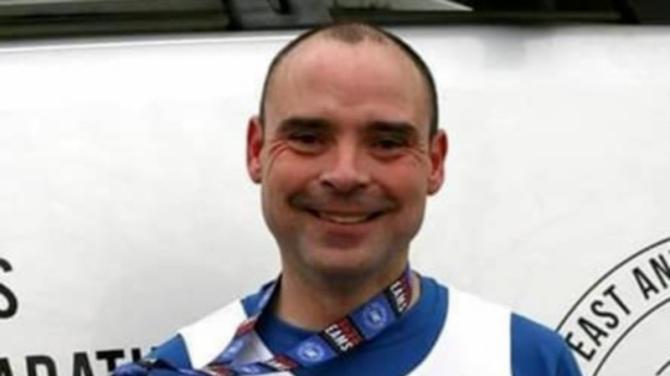 AN ANTRIM man didn’t let the last-minute Dublin lockdown announced on Friday night get in his way of raising money for charity on a mammoth road run.

Indeed, fitness fanatic Arron Johnston has doubled his target and raised around £1,500 for Children with Cancer UK.

The Antrim Guardian told last week how Arron was going to spend his weekend running to the world famous Guinness brewery in Dublin and back, from the Europa Hotel in Belfast.

Arron has now run several 24-hour events over the past few years, but this was be his first time trying it on the roads.

Runners had 36 hours to complete the challenge, organised by Atlas Running.

The gruelling route was due to travel through Swords, Balbriggan, Drogheda, Dunleer, Dundalk, Newry, Poyntzpass, Banbridge, Dromore and Lisburn.

Arron was originally meant to be running the Berlin marathon in aid of Children With Cancer UK, but that was cancelled due to Covid.

But there was yet another last minute spanner in the works when the Irish Government announced tighter restrictions on Dublin city and county on Friday evening in a bid to stem rising coronavirus case numbers in the region.

Arron explained: “The race started at 12 noon at Europa Belfast and the weather was perfect.

“There was 39 runners who started with most raising money for different charities.

“We left Belfast towards Lisburn with fantastic support from families and friends at the start line.

“At about mile 45 we got news that Dublin was to move to ‘Covid Stage 3 lockdown’ at midnight and we could not enter the county, so Atlas Running told us we could run to Julianstown at about mile 85 then turn back and retrace the route back towards Castlebellingham for 100 miles, which I reached in 26 and half hours.

“The roads were very hard under foot and a lot of runners suffered early in the race so pulled out, also not running to Dublin effected runners mentally and felt they did not want to continue.

“I had a great support crew looking after me the whole time also with no sleep.

“They kept me up with food and drinks and had hot pizza waiting, that was amazing, a change of clothes and medical supplies.

“We all came home buzzing but very tired.”

Arron said he is keen to run the race again in 2021 and added: “I have raised about £1,500 for Children with Cancer UK, which is double the target.

“Many thanks to all the supporters for helping achieve this total.”

Children With Cancer UK was founded after leukaemia claimed the life of 14-year-old Paul O’Gorman in 1987.

Within weeks of his death, his family started fundraising.

Deeply moved by the double tragedy, she personally helped to establish this charity.

Since 1988, it has raised over £250 million to help the fight against childhood cancer.

The charity has funded over 200 research projects and currently has more than 60 underway at leading centres around the UK.