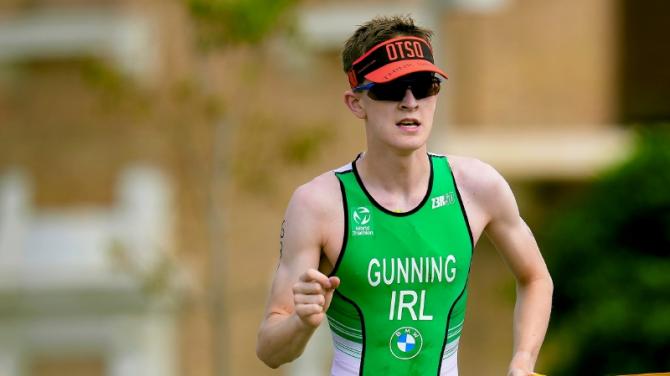 A local teenager has been selected to complete for the Northern Ireland Triathlon Team at the Commonwealth Games.

Oliver Gunning got the news just months after supporters raised over £10,000 to help him purchase a new tandem bike.

In December the Antrim Guardian reported how Oliver Gunning (17) who was diagnosed with Congenital Glaucoma at the age of three, is virtually blind in his left eye and has no peripheral vision in his right.

But after undergoing 28 operations in his life, the teenager has climbed to 35th in the World Paratriathlon rankings.

Oliver launched a Crowdfunder appeal to purchase a new tandem bike, as his existing model was a decade old, with three previous owners and not designed for someone of his height and age.

“For years I've not been able to compete at team or contact sports, due to the many eye operations I had as a child.” he said.

“I was diagnosed with congenital glaucoma at age three, which affected both eyes and by that stage my eyesight had been irreversibly damaged.

“The challenge for the surgical team at Moorfields Eye Hospital, London, where I was fortunate to be treated, was to preserve what sight was left.

“I have had twenty eight surgeries to date, and was told at the age of five, that I'd never be able to ride a bike, swim, drive a car or play any type of competitive sports.

“I am happy to say that I didn’t follow that advice in its entirety!

“With the help of so many people, I am currently competing in triathlons at international level, proudly representing Ireland. The most recent competitions were in Yas Island, Abu Dhabi; Alhandra, Portugal and Valencia, Spain.

“The breakthrough into triathlons came a few years ago, while being introduced to guided running by British Blind Sport.

“This in turn led to joining a running club that could support guided running, meeting a Triathlon Ireland coach there, who discovered I could also swim and cycle.

“And the blessed sequence of events from there, have led me to a rigorous training programme that comes with being a member of the high performance team with Triathlon Ireland.”

Various small grants have been applied for and fully utilised with travel and training to date, but to move onto the next level and compete with the best requires investment, and in particular the new tandem bike.

“The tandem bike that I am currently borrowing is coming to the end of its useful life as it is almost ten years old.” he said.

“The tandem has had a number of previous owners, been put through many races, but crucially was custom built for a triathlete, half a foot smaller than me.

“This means that the racing position for both the guide and I is inefficient and slows us down.

“Additionally you can imagine the mechanical issues of a ten-year-old bike, and the worry about mechanical failures during a race.

“My aim is to compete in the Commonwealth Games in Birmingham in 2022, and then Paralympic Games in Paris 2024.

“I have managed to achieve a lot in para triathlon in such a short time, competing internationally, and also being the youngest para triathlete at the World Championships in Abu Dhabi at the end of October ‘21.

And now one of his dreams has come true.

A spokesperson for Ballyclare High said: “What an achievement and well done Oliver and we wish you and the team every success this summer.”

Now Oliver is looking forward to his first international race of the season, the World Triathlon Para Cup in Besançon, France in June.