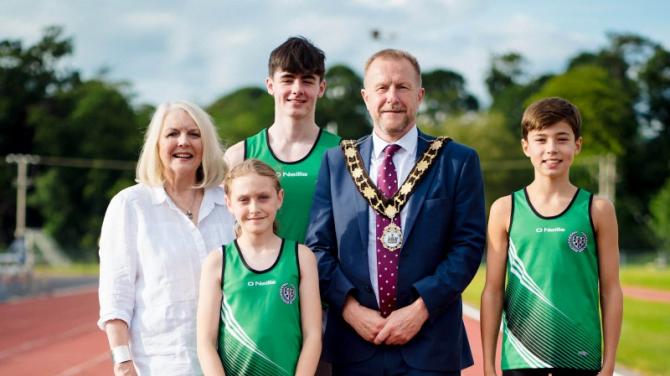 ANTRIM and Newtownabbey Borough Council have paid homage to the sports couple, Sean and Maeve Kyle, founders of the successful Ballymena and Antrim Athletics Club.

Mayor of Antrim and Newtownabbey, Alderman Stephen Ross unveiled a plaque at Northern Ireland Centenary Stadium recognising their significant contribution to sport in our Borough.

The couple has coached an array of well-known Commonwealth, Olympic and Paralympic athletes over the decades.

Sean Kyle passed away in 2015 and will be forever known as a legendary athletics coach, having won ‘UK coach of the year’ in 1987 and being recognised as a stalwart of the local sporting community.

Maeve Kyle, a three times Olympian and a top UK sportswoman was instrumental in the development of the athletics track at the Antrim Forum, which opened in 1979.

In hockey, she gained 58 Irish caps as well as representing three of the four Irish provinces (Leinster, Munster and Ulster) at different stages of her career. She was named in the World All Star team in 1953 and 1959. She was also a competitor in tennis, swimming, sailing and cricket!

Maeve was awarded the Lifetime Achievement Award at the 2006 Coaching Awards in London in recognition of her work with athletes at the Ballymena and Antrim Athletics Club.

Mayor of Antrim and Newtownabbey, Alderman Stephen Ross thanked them both for their enduring contribution.

“I am honoured to unveil this special plaque to a couple who dedicated their lives for their passion of athletics,” he said.

“Sean and Maeve were passionate about every aspect of track and field but for them it was more than a passion - it was their lives.

“They supported many athletes through the club to achieve their potential at the highest levels of the sport.

“Through the power of sport, Sean and Maeve made a real difference to the lives of many young people not only in our Borough, but all across Northern Ireland.

“With their positive, fun, outlook on life, they were role models, coaches, mentors, advisors, educators and much much more.”

Members of the Kyle family including their daughter, Shauna, their granddaughter, Indy and their niece and goddaughter Carolyn here were also part of the ceremony along with representatives from Ballymena and Antrim Athletics Club who continue to keep the Kyle legacy alive.

In recognition of their contribution to the sport of athletics within the Borough, Sean and Maeve were inducted into the Council’s Gallery of Sporting Legends at Antrim Forum in 2012.