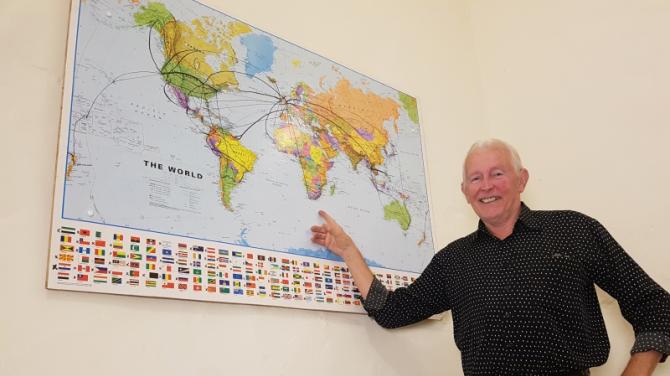 AS a young boy Oliver Bonnes remembers sitting at the feet of an old family friend, listening to tales of travel and adventure across the continents.

“When I was a kid, there was an old boy who lived up the road from us who would come to the house for a bit of céili-ing or a bit of yarning and I don’t know how many of the yarns were true,” he said.

“They were good stories anyway. He said he worked for Al Capone in his liquor places, he said he ‘hoboed’ across America and he took a boat from LA to Australia.

“At school I was always keen on geography, so I guess I can pinpoint exactly when and how I was bitten by the travel bug.”

Oliver was born and brought up in Magheralane, where he still lives - as do his family.

“I built my own house not far away from the family cottage and my sons all live about a field away from me,” he said.

Oliver was adopted and thanks to the advent of the internet and genealogical research, has now met up with a number of long-lost relatives in England and America.

He is perhaps best known in Randalstown for being a local shopkeeper and now publican, running Laverty’s on Main Street.

But the sprightly 71-year-old is certainly one of the best-travelled people in the borough, recently ticking off his 140th country visited.