Sandra is Football Mum of the Year... 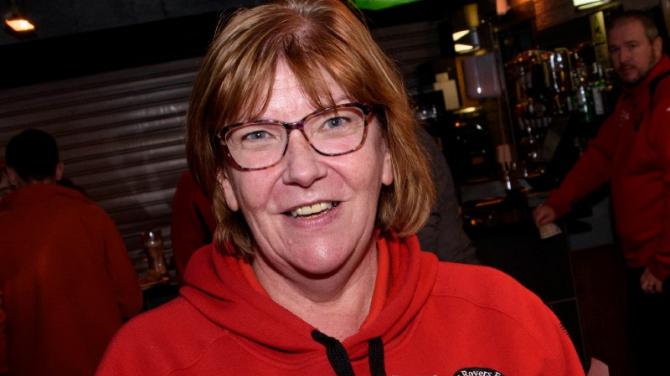 AN Antrim woman has picked up an award for ‘Football Mum of the Year’.

Sandra Bownes, who has been involved with Antrim Rovers for the past 16 years in a range of roles, is currently chairperson and scooped the award at last week’s McDonald’s Irish FA Grassroots Football Awards gala.

She received her award pitch-side at the national stadium, Windsor Park, ahead of Northern Ireland’s match with Austria.

Sandra and her husband Eric also got to meet the soccer legend Pat Jennings.

Ahead of the match, Rovers players presented Sandra with a bouquet and longtime sponsors Moe’s Grill laid on a special buffet.

The Grassroots Football Awards honours those who work tirelessly at local clubs around Northern Ireland.

The awards are now in their 17th year and recognise the incredible work and commitment of volunteers within grassroots football in Northern Ireland.

More than 180 guests were there to celebrate and recognise the highest ever number of nominations across six regional and national award categories.

Sandra said she was ‘over the moon’ to receive the accolade.

Sandra has served Antrim Rovers for 16 years, as a mum, a supporter, a volunteer, a committee member and this year as Chair of the club.

In a time where Antrim Rovers is going through an array of changes, with the development of a new home ground, 20th anniversary celebrations, and the accolade of receiving Sports Club of the Year for the Borough, Sandra is playing a hugely significant role.