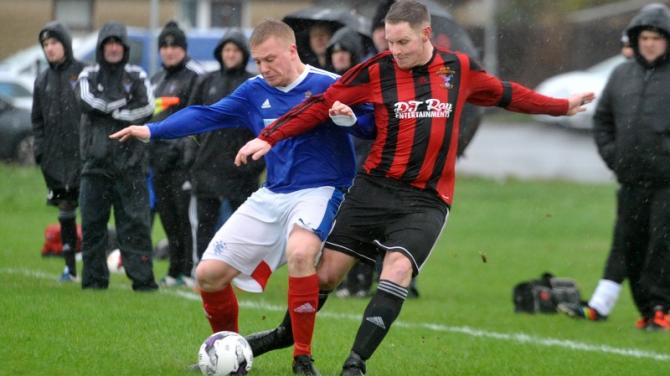 CONDITIONS were horrendous at Wakehurst where Abbeyview led twice before going out in extra time to the Division One champions, Harryville Homers.

Harryville would surely not have needed to go the extra distance but for the heroics of outstanding Abbeyview keeper Darren Harbinson, who set the tone after 15 minutes with a superb penalty save, one that he himself conceded.

Instead, it was Abbeyview who showed the way ten minutes later, when Craig Davis nodded in a Seb Stafford corner.

One-nil then to Abbeyview at the half way mark.

Harryville resumed with a flourish but were kept at bay by a couple of outstanding saves from Harbinson before Darren Campbell tapped in the equaliser from close range.

The Ballymena side would have went one better but for another couple of notable stoppages from Harbinson.

And instead, it was Abbeyview who once more took the lead; courtesy of Stafford’s deflected 25 yarder.

Ten minutes from time, Harryville were granted a second penalty; not quite so clear cut this time, following a challenge from Ian Brownlees.

Ryan Stewart went the same way, and so did Harbinson, but despite the keeper’s best efforts, this time, force did overcome anticipation.

The Homers had a couple of late chances, kept out by Harbinson and so it was into extra time, where Harryville forged ahead for the first time inside the first period, though an unchallenged header from Robbie Sutherland.