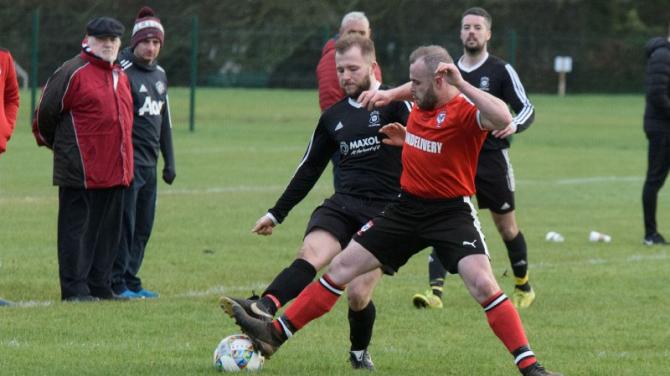 THIS was an easy enough win for FC Antrim with this ‘seven up’ against FC Moylena in Saturday morning’s derby at the Forum.

There was little between the sides, however, until Antrim lit the fuse on 35 minutes, Ryan McAuley and Miles Devine linking up well to prise an opening for Micky McKendry to fire a left foot shot low down to the keeper’s left.

Yet Moylena could have cancelled that one out.

It looked a shade harsh when the referee pointed to the spot, after John Barclay went down inside the box.

And for Moylena it was a double blow, as three minutes later, Antrim went further ahead, Oran McAuley carving out an opportunity for cousin Conor McAuley.

Then right on half-time, Conor turned provider, laying on the supply for Devine.

The game was as good as over just three minutes into the second half when Oran McAuley was brought down inside the box, dusting himself down to complete the formalities with the resultant penalty.

Moylena kept plugging away and Roy Robinson demanded another fine save from Kerr.

However, it was a matter of how many once McKendry got his head to a Conor McAuley corner for FC Antrim’s fifth.

Oran McAuley, meanwhile, brought up the half dozen, dinking the ball round the keeper.

Conor McCoy almost made his mark, thudding one off the crossbar, but instead it was left for Shane Donnelly to provide the final chapter, drilling the ball in low to the keeper’s left.

Man of the Match: Micky McKendry.

This Saturday, Moylena travel to Sporting Ballymoney, while Antrim travel to Randalstown Ramblers in the Rainey Cup.