Kevin just can't stay away from 'the beautiful game' 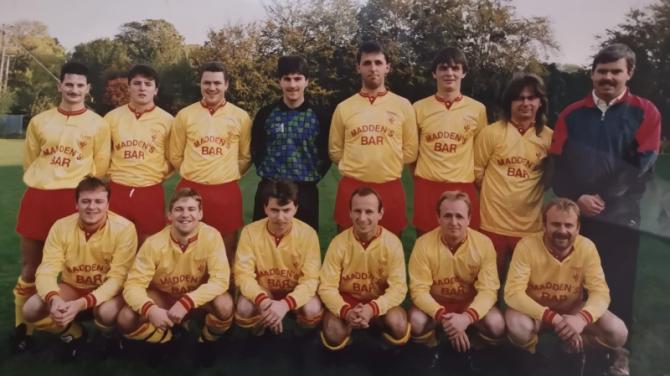 LIKE many Antrim residents, Kevin Dennison grew up in Belfast, but left at the age of 11.

“The Troubles had broken out and things were getting difficult, it was the 1970s and my mother didn’t want her sons getting into bother or getting caught up in anything, so the family took the decision to leave.”

The Dennisons came to the Greystone estate, which was a bit of a culture shock for city boy Kevin.

“I attended St Joseph’s and then St Malachy’s, but I didn’t really enjoy school.

“I was always seen as a bit of an outsider and I got into lots of fights!

“I did find it quite hard when I came to Antrim first.

“But I played a bit of football and I was rarely in the house, there was a big green area like a pitch at Greystone so I would spend all day there, go home and have something to eat and be out again.”

Kevin embarked upon job schemes after leaving school and then had a series of jobs, including at McQuillan Meats. before becoming an apprentice welder at Montracon and eventually moving to MDF, where he has worked for over 20 years.

“The football thing started off very naturally, the estates all had players and every estate would have a little team.

“On Sundays a few of the estates would get together and play each other.

“We would maybe go over to the Steeple and the next week they would come to us.

“It was very informal but eventually more teams came on board and we got a bit of a league going and we got trophies sorted out.

“I was 13 when I started playing for Greystone and I won the Under 13 and Under 14 trophy.

“Then, when I was about 17 I got a spot on the Chimney Corner youth team.”

However, life and work got in the way and Kevin drifted out of football for a while.

“I was only interested in going out and partying , the usual type of stuff and I lost all interest in football for a few years,” he said.

“However, when I was about 20 or 21 I randomly got talking to a fella called Paddy McKendry who knew me from my Greystone days and he kept at me to try and get back into it.

“For a long time I did not have the interest, but somehow he got into my head and I started thinking about it again.

“I was too old! When I was 34, all the players were much younger and were running rings around me!

“When you’re at right back and you are trying to mark 17 and 18-year-olds flying all over the place, you can fairly start to feel it.

“Rathenraw eventually folded but I left on a high when the team was in a good place.

“The side was eventually reformed, to what people today would know as FC Antrim and they are still on the go now.”

Life continued for Kevin, with marriage and children and work occupying his time - but as usual, he couldn’t stay away from the lure of soccer for too long!

“I was approached again, but although I was past it in terms of playing, people started asking me to help out organisationally.

“One thing led to another and I eventually ended up managing FC Antrim.

“I manage like I play. I’m very passionate and I get stuck in, yes I do shout from the sidelines and I have kicked a few water bottles in my time, I can’t help it!”

With FC Antrim, he helped pick up two trophies in seven days, the Second Division Cup and the George McAuley Cup.

“The George McAuley Cup is something that I was very proud of,” he said.

He stepped down for a short period before being asked to become assistant manager for Moylena.

That role of ‘assistant’ was not to last long and soon he was the boss again.

“I was with Davy McDowell who was just a few years older than me but played at a higher level and I learned a lot from him.

“During this time, FC Antrim had all but folded, but I left Moylena and went back to help start it back up again.

“It felt hard to be back there starting from the beginning again.

“It was a completely different team and I only stayed for half a season.”

Then it was off to one of the town’s newest sides, Brantwood FC.

“Alan Clarke started it up and asked me if I would give him a hand.

“There were lots of enthusiastic young players and they had a good wee set-up so I gave it a go.

“We started at the beginning really and there was a lot of work involved in getting money, kits and sponsorship together.”

With so many teams out there, Kevin admits it is ‘dog eat dog’ in Antrim.

“Teams do shop about for players and staff,” he said.

“There are lots of phonecalls, you hear a rumour that a player isn’t happy where he is, he’s not getting the starts or being played in the right position, you give him a call and say, why don’t you consider coming up here?”

“Players do have a wide choice of teams and they do have the opportunity to move around if they are not happy.”

And like many sports, Kevin has seen big changes over the years.

“Personally, I think a lot of the young ones now, they would not be as passionate. When I was playing, if you got the opportunity to play a bigger team or in a higher division, that was something you would really jump at, that was a match that you would fight to play in.

“Now I don’t think there is 100 per cent commitment from a lot of players, there are a lot more distractions.

“Training two nights a week and playing on Saturdays - I would have never missed it, but I now hear a lot of excuses - some girlfriends must have three or four birthdays a year!

“However, I know it’s not just football and it can be hard to get young people into sport generally.

“I lost interest myself for a while so I know how easy it can be to get distracted, but it is always something I came back to.”

Kevin and his future wife went to school together and were in the same class at St Malachy’s, but he laughed: “We never really bothered with each other!

“We met up years later in the Deerpark. I knew her brother well and we were chatting and I came down to their table and that was it. I started chatting to her and we had a few dates after that and got married in the early 1990s.”

The couple are now approaching their 30th anniversary and have two daughters.

“In between work and never missing my Monday and Wednesday training and Saturday mornings, and my family, I do keep busy!

“I did try to get the girls into sport when they were younger but I am outnumbered and they will always do their own thing!

“We train at the Antrim Forum back pitches and the Allen Park 4G pitches in the darker months.”

As well as local teams, Kevin is also a big Celtic fan, although he doesn’t have any time to go to their matches these days.

“I’ve had some brilliant experiences and memories over the years, football has helped me through some tough times in my life and I’ve had some great craic with good people,” said Kevin.

“Picking up the George McAuley Cup was definitely a high point and managing FC Antrim to success is something I am very proud of.

“After my last wee break I wasn’t sure I was going to bother again but I am excited by the current Brantwood team and I think I will stick at it for another wheen of years!

“Every time I go back, my wife just looks at me!

“I do still get very into my games and I do take it really badly when we lose, especially if we lose to another Antrim team. But my wife knows to leave me alone and not look at me or speak to me when that happens!”