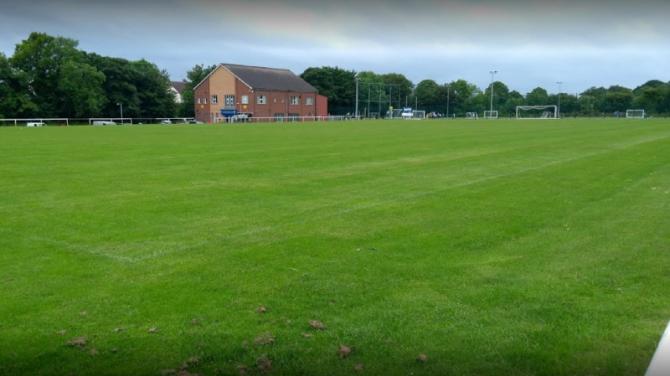 FOR Tom McPeake - and many others - Crumlin United is more than just a football club - it’s a way of life.

Tom was born and lived for a short period of time in a thatched cottage near Aldergrove - where his parents had met at the RAF base - before the family, including Tom’s four sisters and one brother, moved the short distance to Crumlin.

Back then it was a small rural village where everyone knew everyone else.

Tom was schooled at St Joseph’s Primary - three classes partitioned off in one building, with a dry toilet.

“One day they had a difference of opinion and we had an extended lunch break!” Tom joked.

“I enjoyed school. Years ago people would have left school at 14 or 15, but when I was 12 I got to go to Saint Aidan’s Intermediate in Glenavy.

“This was a dramatic event. We got the bus, there were different rooms for different classes and subjects that were never heard of.

“There were training facilities and sports pitches and showers!”

After leaving school, for a time he worked at Belfast International Airport, before undergoing a joinery apprenticeship.

Tom’s working life over the last 40 years has been spent mainly in freight and warehousing.

Back in the 1950s and 60s, Crumlin was a small village of some 400-500 people, and there was not a great amount of entertainment to be had, apart from a ‘fleapit’ cinema in a Nissen hut.

Tom admits that as a young boy, he became famous in the area after getting very immersed in one particular picture.

“It was a Davy Crockett film. I must have been about seven or eight and they were in a forest and the Indians were creeping up.

“So I roared: “Look out Davy, they’re behind you!

“People still talk about it to this day.

“But in a small place like Crumlin, the cinema was a big thing and we waited all week for the Saturday matinee. I loved the Mark of Zorro!.”

“Andy Haslett, Billy Pedlow - he was a market man who bought and sold cattle and tied his coat with baler twine!” Tome recalls.

“There was a Vauxhall Carlton that certain people used to use to catch 40 winks outside the pub, we called it the Carlton Hotel!

“Davy McArt was another one and Colin McClooney, who was a barber and wouldn’t stop telling jokes - some of which were pretty inappropriate for a child of nine or ten!

Tom’s family had moved to Cairn Gardens when he was a youngster and like most young lads, he enjoyed playing football on the ‘back field’, which has long since been built over.

He was also involved in St James’ GAA club for a long time.

The big employer of the area was Ulster Woollen Mills and a football club was founded around the factory by John Henry, Jimmy Wilson and Billy Friars in 1967.

The company provided the team with a pitch for the season, but folded the following year.

The team returned as Crumlin United and they progressed from the Lisburn League Second Division to promotion in their first season.

As Crumlin United began to expand, so too did the village, which underwent a dramatic change.

Less than 15 miles from Belfast, more and more people from the city began to make it their home.

“The village is now a town and it has changed beyond all recognition,” Tom said.

“The Civic Week in the 70s and 80s was fantastic and brought the whole community together.

“But as the population increased, we knew we had to do something to keep that community spirit going.”

Crumlin United had played their home games at Crumlin War Memorial Park but in the 1990s, with Tom now as Chairman, they acquired their own social club and were able to purchase a six and a half acre site at Mill Road for £9,000.

The club now has grass and 3G pitches as well as a spacious club facility which sits at the heart of the community, being used by groups of all types, from Irish dancers to pensioners’ tea dances.

There are also darts and pool teams.

The football academy has seen players rise up through the ranks from primary four to the first team - but Tom and his team are not stopping there.

“Applying for funding can sometimes be like a full-time job but we have a very dedicated team and we have received fantastic support from Antrim and Newtownabbey Borough Council and bodies like GROW South Antrim and the Alpha project.”

Such support has helped schemes including a walkway around the pitch to help improve community fitness.

There are also future plans for the ‘Pakenham Community Hub’, a planned complex offering a wide range of services such as sport, arts, culture, drama, dance, health and social services, a café, and much more.

The building will also serve as a stand facing on to the grass pitches.

The facility is named for the Pakenham family of Langford Lodge.

The Pakenhams sold the estate to the Air Ministry in 1940, when the airfield was opened.

In 1959, the estate was bought by the Martin Baker Aircraft Company and Territorial Army Sappers blew up the mansion house.

Crumlin’s stone clock tower, built in 1897, is also a memorial to a member of the Pakenham family, who were landlords in the area.

This nod to history is typical of the ethos behind the club.

“Football is just one part of Crumlin United,” said Tom.

“We have some fantastic players of all ages and we are delighted about the commitment of our young people, especially in this day and age when it is hard to get children away from their phones and computers.

“The parents are very supportive too and we could not do it without their input.

“Young people are learning about discipline and training, their families know where they are, they are not running the streets or getting involved in anti-social behaviour.

“But it’s not all about playing, either.

“Clubs cannot run without committees and the people who are filling out forms and getting things organised are as just as important as the guys and girls out there on the pitch.

“It’s been remarked that I am quite good at grabbing people by the elbows and getting people talked into doing things, but I think every club needs someone like that!

“But having said that, most of the people in Crumlin would do anything they can if they think it will help, even if they have to be talked around!

“At the start I think the Pakenham Community Hub was a bit of ‘pie in the sky’, but the community and the funders have believed in it and the council has been brilliant in getting an architect to help draw up the plans and get a business case together.

“We are very grateful and it is great to see the vision becoming a reality.

“Geoff Wilson, in particular, has worked very hard on this issue.

“There are hurdles to jump on every project, but we keep getting through them, because there is a great team here, both on and off the pitch.

“When you think about what we had before - no facilities, a men’s and a ladies’ changing room at the side of a field for two teams - and the away teams had to use the ladies’ area - and you look at it now, what we have is state of the art.”

Tom’s other interests include running - and having completed the New York Marathon in aid of Co-Operation North, now Co-Operation Ireland, he was invited to a garden party at Buckingham Palace, where he was introduced to the Queen.

He also met the former Irish president Mary Robinson through his charitable endeavours.

“Yet we were out raising money for peace in Ireland, where I suppose you could say it was relatively much safer.

“And a few years later, the former Mayor Rudi Giuliani had cleaned the whole place up and you could walk around with no problem.

Tom himself has three girls and a boy.

Not surprisingly, the women in his life - including two daughters who are teachers - are encouraging him to slow down a bit.

“I drove all over Ireland in my working career and then went into warehouse management and I was doing all this as well,” he said.

“I’ve stepped back a little with work, but Crumlin United is a labour of love!”