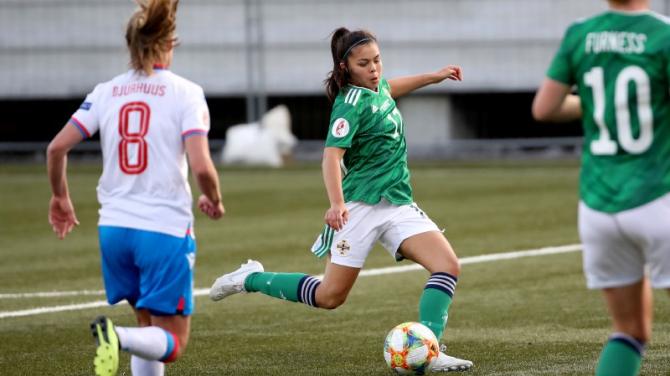 NORTHERN Ireland International Joely Andrews’ dream of playing in the UEFA Women’s Euro 2022 moved one step closer when the side edged a decisive game against Belarus on Friday.

Northern Ireland battled to a 3-2 win - and a victory over the Faroe Islands today (Tuesday) would see them through to the play-offs.

It is a remarkable achievement given that Northern Ireland’s women’s team has never previously taken part in a major championship.

They had lost two of their first four games of the campaign, but they have hit a rich seam of form just at the right moment.

And 18-year-old Joely Andrews has certainly played a role in their recent reversal of fortune!

Speaking this week, she revealed that she was ‘living the dream’.

“When I first started playing football, it was just after school for fun,” she said.

“Once I got into the county excellence programme I realised I’d love to play for Northern Ireland one day.

“I used to play hockey at school and was in the Ulster Development squad at U15 level, but had to make a decision between hockey and football so chose football.

“I still played hockey right up until I left school and really enjoyed it.”

But now she is playing on a much bigger stage, and making memories along the way.

“My personal highlight would have to be getting my senior international debut in our 6-0 win over Faroe Islands back in September.

“It was a massive win for us and gave us loads of confidence going into the next game against Belarus.

“After such a long lockdown and training alone it was great to get the reward for all the hard work we put in over the summer.”

And that hard work has escalated as Northern Ireland fight for their place at the Euros.

“The domestic players train once or twice a week. It has been really competitive and we are always challenging each other to get better.

“Everyone is well into their club season too, playing matches every week has been great to get match fitness going into this camp.”

The local teenager is no stranger to juggling commitments.

“Last year I was studying for my AS levels at the same time as training to go to the Elite round of the U19 European Qualifiers.

“Balancing school and training was difficult sometimes as both were very time demanding but thankfully I was able to manage!”

Clearly she has a long career ahead of her - but she has already achieved so much for someone so young. So what are her biggest footballing highlights?

“It’s hard to choose but qualifying for the Elite Round of the Under17 Euros really sticks out,” she said.

“We were the third seed in our group and managed a 1-1 draw with the top seed Switzerland and beat Kazakhstan 5-0.

“It was a great trip. We drew Portugal and France in the next round and got to test ourselves against some of the best teams in Europe.”

So what drives her on?

“The best piece of advice I have ever received is ‘hard work beats talent when talent doesn’t work hard’.

“I think it was my dad who told me that. It basically means that no matter how talented you are it’s no use unless you are committed and work hard to fulfil your potential.”

While the Euros are obviously front and centre for the squad this week, Joely has no shortage of ambition.

“I think the future is really bright for the women’s game here,” she said.

“It would be great to see some of the teams in the league go semi-professional or even professional!

“Hopefully participation will continue to increase and more young girls will get involved as well as support for the league growing with more media attention and fans at matches.

“Certainly support, like that from Electric Ireland’s Game Changers campaign is really making the difference in getting young girls to take up the sport and encouraging fans to get involved.

“For me I would love to play professional one day but we will see what the future holds.

“Qualifying for a major tournament with Northern Ireland would be unbelievable and I think we are on the right track to getting there.”