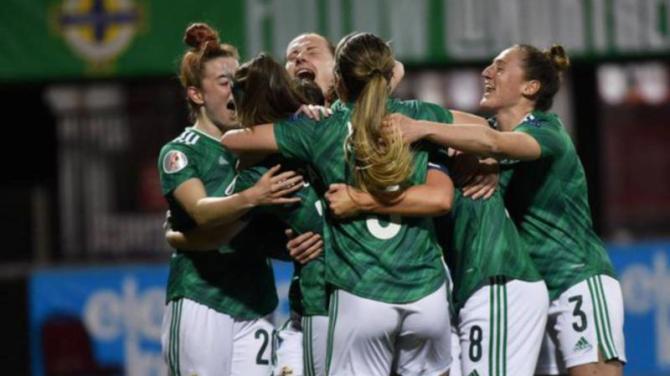 THE Northern Ireland Women’s UEFA European Football Championship Games are set to be shown on big screens around the borough next year.

A motion, brought by Councillors Allison Bennington of the DUP and Vera McWilliam of UUP was unanimously agreed at the April meeting of Antrim and Newtownabbey Borough Council..

It moved that: “This Council recognises and celebrates the historic achievement of the Northern Ireland Women’s Football Team in qualifying for Euro 2022, resolves to write to the Irish Football Association to congratulate the team on their fantastic achievement and engages with teams across the Borough on how women’s football can be further developed."

Council screened the Northern Ireland Men’s Football Team matches in the European Championships in 2016 at Mossley Mill and Antrim Castle Gardens at a total cost of approximately £50,000.

The average cost per match at each venue being £6,250 with eight matches in total screened as the team made it through to the last sixteen playing four matches in total.

At the full monthly meeting of council this week, reps are being asked to consider a similar arrangement for the Northern IrelandWomen’s Team matches in the UEFA Women’s European Football Championship in July 2022 using the Civic Square in Mossley Mill and the Parterre in Antrim Castle Gardens as suitable locations in the Borough, with V36 at The Valley another potential location.

A report due before the meeting said that ‘all venues are accessible to the public, whilst at the same time able to provide a controlled and safe environment for such an activity and able to accommodate erection of a large screen, technical capability, staff support, comfortable outdoor spectating for interested fans as well as supporting amenities such as car parking, public toilets and hospitality outlets’.

There are sixteen teams playing in the tournament from July 6 to 31 2022 in venues across England, which have been divided into four groups of four for the initial tournament stage.

The Northern Ireland team will have at least three group matches to play.

The Tournament draw will not take place until October 2021 so details of the match schedule will not be available until then.

It is proposed to screen each of the three games at a single venue in the Borough on rotation between Antrim Castle Gardens, V36 at The Valley and Mossley Mill at a cost of approximately £7,000 per match per venue and therefore a total cost of £21,000.

Should Northern Ireland qualify from the pool stages they potentially could play up to another four matches.

To continue to screen any additional games would cost an additional £7, 000 per match per venue as a minimum.

It was recommended that the proposal be accepted.