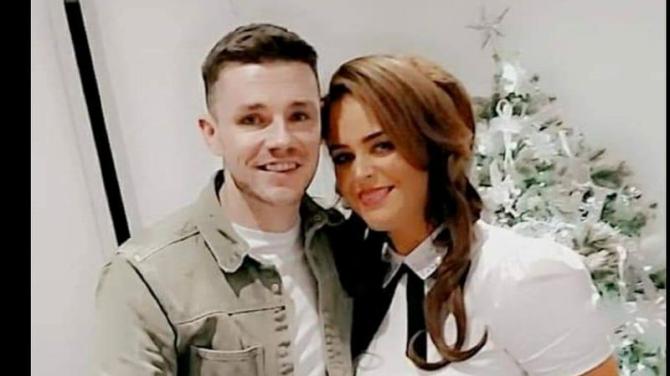 The 33-year-old was playing a training match with Crumlin United Football Club, when he suddenly collapsed on the pitch much to the shock of his team mates and spectators.

What could have gone wrong? After all, Brendan was an incredibly fit young man so it was a ‘complete shock’ to everyone.

Unbeknown to all, Brendan had suffered a cardiac arrest and his life was in the balance.

It has grim echoes, of course, with Christian Eriksen, the Danish international, who suffered a heart attack as the world watched in the early stages of Euro 2021. He survived thanks to swift medical intervention.

Thankfully Brenda’s teammates acted quickly too, with the goalkeeper Martin McDevitt administering CPR and using the clubs defibrillator, until the emergency services arrived which prevented his heart from stopping.

The service brings urgent medical assistance to anywhere in the province, operating seven days a week for 12 hours per day.

Crucially, it can get to anywhere in Northern Ireland in approximately twenty-five minutes.

The team treated Brendan at the scene, before transferring him to the Royal Victoria Hospital, where he remained in intensive care for a few days.

Medical tests confirmed that Brendan has an underlying heart condition called Alcapa and in September 2020 he underwent open heart surgery.

Brendan's road to recovery did not end there, as he was then fitted with a personal defibrillator and remained in hospital until October 1 2020.

It has been quite a journey, but Brendan knows that he is a very lucky man.

“The work of the people at the pitch and the air ambulance that day basically kept me alive and it is something I will always be grateful for,” he said.

Throughout the month of March this year, Brendan's wife Nichola and her cousin Ciaran Caldwell - the first team manager of Crumlin United - along with some members of the club and various family and friends, took on a '5k a Day' challenge to raised much needed funds for Air Ambulance NI.

With the recent easing of restrictions, Brendan, along with his family, was able to visit the Air Ambulance NI airbase and meet with representatives of the medical team.

Glenn O'Rorke, Operational Lead for The HEMS welcomed the opportunity to meet him in happier circumstances.

“Brendan's outcome could have been so different if early CPR had not been administered and they did not have access to the defibrillator,” he said/

“Early medical intervention is key in instances like Brendan's.

“The important message for anyone who finds that their loved one is not breathing is to call 999 and to have a go at CPR. The 999 ambulance controller will guide you with simple instructions.

“CPR helps get blood and oxygen to the vital organs. The objective is to save life, prevent brain damage and buy time until medics arrive.

“In Brendan's case, access to and administration of the defibrillator was vital to restore a viable, or "perfusing", heart rhythm.

“We are so pleased that Brendan has made a great recovery and his heart condition is now identified.

“Patients are at the centre of everything we do, and it is always lovely when patient families choose to get in touch.

“We are also very grateful to Brendan's family for their fundraising support which will help future patients receive the care they need at scene."

The player was happy to give something back. He has bounced back remarkably well, but he knows that he still has a long road ahead.

“It has been tough, physically and mentally. Being in hospital for so long, and your whole life changes just like that,” he said.

“There are good days and bad days, - but hopefully more good.

“And being alive is the main thing. Once you have a cardiac arrest, you don't hear of too many people surviving. I just feel very grateful I am still here and I survived it.

“I am sure Christian Eriksen will be feeling the same way. He has a young family, too, so it is a very similar situation."

The charity Air Ambulance NI is encouraging the community to support its upcoming fundraising events which includes an abseil of Belfast Castle on Sunday August 8 2021 and Dragon Boat Racing on the Rover Lagan on Friday September 10.

For more information and to register please see