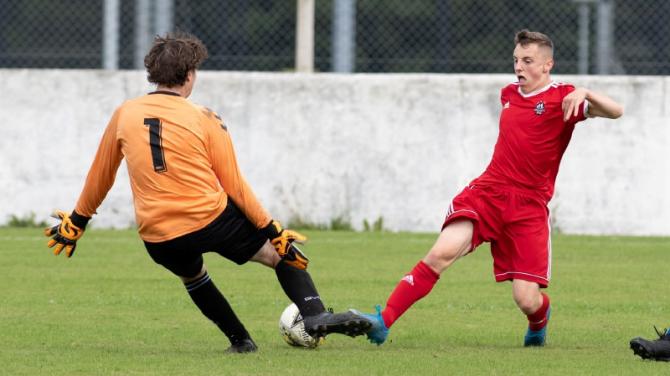 AFTER losing 4-0 at Cookstown Youth on Match Day One, Chimney Corner manager Stephen Hughes was glad that his side could ‘get right back on the saddle’ with Tuesday night’s encounter against Donegal Celtic.

And there was enough here to suggest that the opening day was a mere blip, as the Antrim side comfortably rode away with the points.

As manager Stephen Hughes told the Guardian: “Donegal Celtic posed some threat in the opening 15-20 minutes, but it was a match we were always going to win - it was just a matter of how much.

“It was five, but it could have been more!”

Corner, too, were without the likes of Joel Haggan and Kyle Robinson, and after a few early threats from the West Belfast side, Chimney were always in control.

The Allen Park side, too, deservedly forged ahead when defender Graham Ervine got onto the end of Joshua Blackadder’s cross.

Kurt Cooper then added a second before the break.

The points were already safely in the proverbial bag before Graham Ervine notched his second and Corner’s third just after the turnaround.

There was still time, though, for Ryan Worthington to make his mark, with two goals off the bench.

Man of the Match: Graham Ervine.

After hosting Celtic on Tuesday, on Saturday it was Rangers, where Chimney Corner roared through to the next round of the Sadler’s Peaky Blinders Irish Cup with this 10-2 romp over Mid Ulster League side Rectory Rangers,

“We were clinical, though we could have had even more,” said Stephen Hughes.

“Rectory Rangers did look dangerous in the opening 10 minutes but we realised where the threat was coming from and with a bit of minor tinkering, we dealt with it.

“After that we were clinical. Fair play to them, they kept trying to play the same way, even when the goals were rolling in, but we just kept picking them off!”

Ten goals yet no hat tricks, though there were doubles for Johnny Coulter, Joel Haggan, Scott Cummings and John Alexander. The other two came from Craig Gilmore and an own goal.

Corner are in action again on Tuesday at home to Ballymoney United and its home comfort again next Saturday, with a tasty local derby against Crumlin United.

Man of the Match: Joel Haggan.