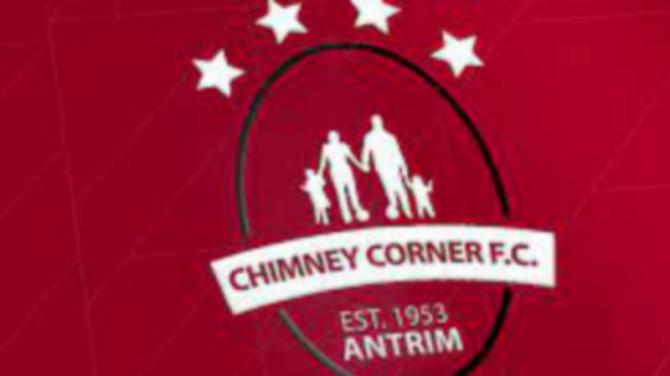 STEPHEN Hughes has stepped down as manager of Chimney Corner to take over the reins at Premier Intermediate League side Moyola Park.

He had been in charge at Corner since May 2020, following the departure of Kingsley Burrows. Stephen, a UEFA A licensed coach, had formerly two spells managing at Championship level with Ballyclare Comrades.

Along with him go his backroom staff of Stephen and Billy Black.

“It was just too good an opportunity to turn down,” he told the Guardian.

“You always try and encourage players to go up the levels and get as high as you can, and it’s the same for management.

“It’s with a heavy heart that we’re leaving Chimney Corner. We came in and were doing a good job, second in the league but that attracts attention. I thought it would have attracted the attention of the players, I wasn’t expecting it to be me.

“Mervyn Pattison had been manager at Moyola for the last 10 years or so, they made a big decision to make a change.

“I sat down with them. They presented their plans and projects, showing me where they want to go and how they want to progress. It’s a good set up, they have a three year plan and it’s nice to be part of it

“I had been managing at Championship level with Ballyclare Comrades and it was always at the back of my mind, that I’d like to get back up to that level again. Moyola remember are just one Division below the Championship.

“We will assess the squad between now and January. We have no expectations, but we still want to go there and win matches. We will see what we need to bring in when the window opens in January.

“I’m looking forward to getting started with them on Tuesday night. While I was happy enough at Chimney Corner, it’s a new challenge, a step up, and I can’t wait to get started!”

A Chimney Corner spokesperson said: “We would like to wish Stephen Hughes and his backroom staff Stephen and Billy Black our best wishes as they take up their new positions at Moyola Park. The committee appreciate the hard work and professionalism they all gave during their time at the club. There will be an announcement made early in the week regarding our new manager and backroom staff.”

And we hope to have news of that in our next edition.

Finally, it’s a big thank you to Stephen Hughes from the local press. Like his predecessor Kingsley Burrows, Stephen was always available to answer the phone and ‘talk football’ on Sundays.

Chimney Corner had no fixture on Saturday.