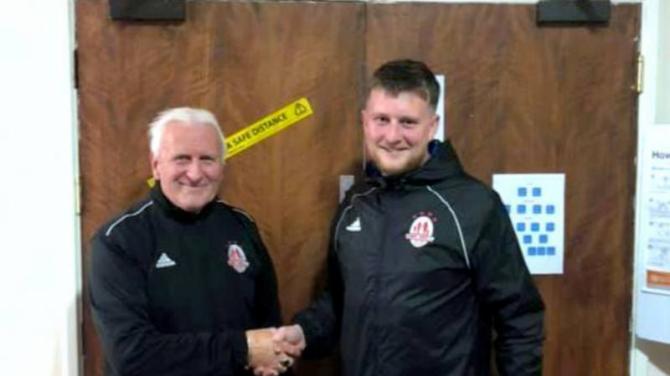 CHIMNEY Corner have gone what used to be known as the ‘Liverpool way’, in promoting from within, writes Alan Hall.

The side has announced long-serving player and former captain Mark Butler as their new manager, in succession to Stephen Hughes, who left last week to join Premier Intermediate League side Moyola Park.

Mark has been very much part of the fixtures and fittings at Allen Park, a dedicated one club man, making his debut as a 16 year old under the late Shay Hamill.

As Mark told the Guardian: “I had been with Ballymena Youth and then Chimney Corner were starting to get their youth set up going. Shay asked me to sign and I’ve been here ever since.”

That was some 16 years ago, and Mark has served under a succession of managers since then, including the likes of Shay Hamill, Paddy Kelly, Stephen Hatfield, Sammy McVicker, Sean Hanna, Kingsley Burrows, Stephen Hughes and more.

As Mark continued: “I’ve picked up bits and pieces from all the managers and I hope it will help me.

“A lot of the squad Kingsley had are still there; Stephen added a few more in and there’s now a squad of 21 or 22 players, including two goalkeepers, which you need.

“We’ve 16 or 17 every week, with some players disappointed they’re left out.

“I’d already spoken to the players and they were happy enough for me to go ahead with it.

“I know the players; they know me, its continuity, building on the foundations that are there.

As a central midfielder/central defender, Mark had basically been a wise old experienced head amongst a very youthful side.

Under Stephen Hughes, with his playing days coming to an end, he became more involved in the coaching side, and was an integral part of the backroom team that had seen Corner rise to second in the league this term

As he concluded: “I had been coaching kids for quite a few years now, and then helping Stephen out with the first team, it’s all be building up to getting a job like this.

“It has come at a good time, with the club sitting second in the league. I can’t wait to get started!”

As Chimney Corner secretary John Robinson said: “We are delighted to announce that Kyle Rendall has agreed to come on board as assistant manager alongside Mark.

“This is an exciting appointment and one who brings a wealth of experience with him, most recently with Warrenpoint Town.

“Kyle is an A licence coach and someone who we know will help Mark to help progress the team forward.”

Kyle had been at Corner before, having previously worked as a first team coach in 2013 under Stephen Hatfield.

As Mark Butler stated: “I got on well with Kyle then, we kept in touch, and I’m absolutely delighted to get someone of his experience into the club.

“He’s a quality coach and having worked with him before as a player, I know what he will bring to the table and the squad will enjoy working with him.”