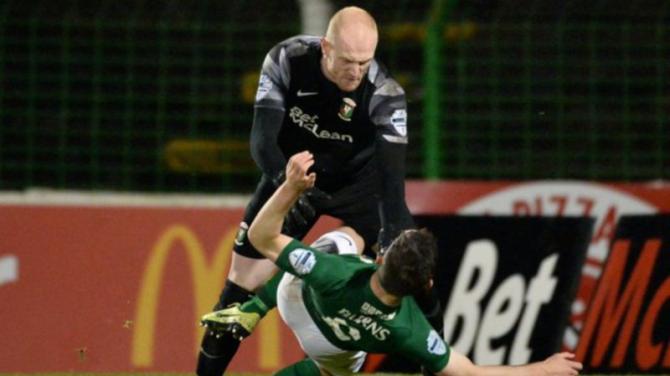 AARON McCarey has been hit with an Irish FA charge after his clash with Glentoran team-mate Bobby Burns during last week’s 2-2 draw with Coleraine.

The goalkeeper has been charged with ‘bringing the game into disrepute’ under Article 17 of the Irish FA’s Articles of Association.

McCarey was sent off after he lunged at the Crumlin man - son of former MLA and local councillor Thomas Burns - in the aftermath of Coleraine’s late equaliser, leaving the former Glenavon man on the turf at The Oval.

Sanctioned with violent conduct, he was initially banned for three matches ahead of any additional penalty handed out by the Irish FA.

There has so far been no sanction handed out after the charge was handed out the Irish FA’s disciplinary committee.

Instead, Glentoran have been invited to attend a hearing on Wednesday, November 3.

Article 17 indicates that any player found to have brought the game into disrepute shall be ‘liable to expulsion, suspension, fine and/or such other penalty or sanction’ that the Irish FA Board, or the disciplinary committee if powers are delegated, sees fit.

Glentoran manager Mick McDermott said after the game that there would be consequences for the incident.

“It was an unfortunate incident that happens in football,” he said.

“We don’t have any unrest in the dressing room, definitely not. Aaron put his hand up and apologised, he admitted his actions were unacceptable. These things happen, we are not happy about it.”