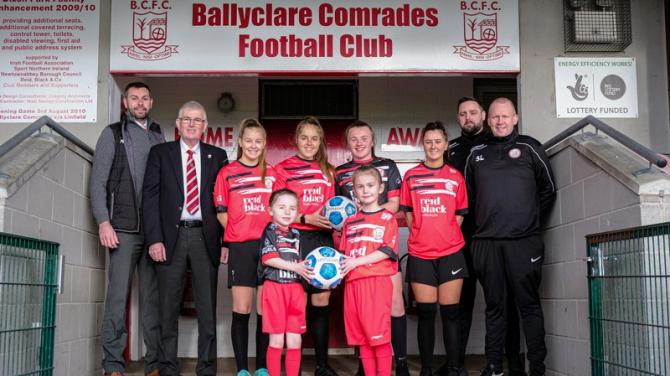 BALLYCLARE Comrades FC have said they are ‘delighted’ to announce the formation of Ballyclare Comrades Ladies, following an amalgamation with Carnmoney Ladies FC.

This exciting news has been in the pipeline for a number of months, with officials from both clubs working closely together to plan for the new venture.

The Senior Ladies teams will be managed by JP Coogan, providing continuity from his previous role at Carnmoney Ladies. The NIWFA 2022 league season begins in April, and the club are excited to see the girls wearing the red of Ballyclare Comrades at Dixon Park.

Steven Lowry, chairman of the new Comrades Ladies section, said it was an exciting time for the club.

“When this opportunity arose to join the Comrades, it was too good of an offer to refuse,” he said.

“It’s a great opportunity for the club, we have such a rich history over the last ten years.”

“Coming in to an NIFL club gives us better opportunities to progress both on and off the pitch.

“We now have much better facilities at Dixon Park which will hopefully help us to progress up the divisions.”

“In our 102-year-history, we’ve never had a Ladies team and so it’s great to now bring Carnmoney Ladies on board.

“I believe it is the correct way forward for our great club and I wish everyone involved the best of luck.”

Comrades Men’s First Team Manager, Paul Harbinson, added: “It’s something we have been working on for a long time as part of the development process over the last number of years and I’m extremely excited for the club.”