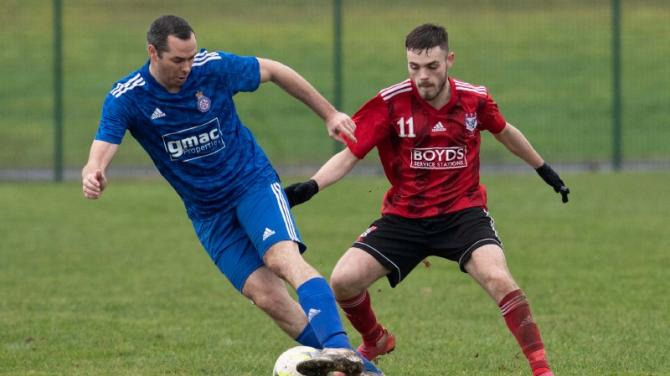 AFTER two wins for Abbeyview this season, it was third time lucky for FC Antrim who take the latest bragging rights after Saturday morning’s Division 1 derby at the Forum.

Conditions were good and unlike the previous ding dongs, this time FC manager Kevin McAuley had nearly a full squad at his disposal.

Typically, there was no holds barred, right from the off, with FC shading the opening exchanges.

The game also marked Darren Harbinson’s swansong for Abbeyview, the keeper being snapped up by Premier Intermediate League side Moyola Park. The ubiquitous Lady Luck, too, showed some sympathy on Darren when veteran striker Chris Dowie tried his luck from distance; the ball fizzing over the keeper but thudding back off the crossbar and out for a goal kick.

At the other end, Abbeyview’s top gun Nathan Wilson dragged one just the wrong side of the upright.

Meanwhile, Harbinson reminded Abbeyview fans of what they will be missing, with a superb fingertip save to divert a Kyle Buckley free kick onto that long suffering crossbar.

Scoreless then at the break. The second half seemed to be following the same template as the first, with FC enjoying a slight edge. Dowie, though, could be a mite disappointed that he at least didn’t force Harbinson into a save, when crashing a half chance wide of the target.

The deadlock was finally broken when James McCabe capitalised on a breakdown in communication between Harbinson and McKelvey, looping a header over the keeper into the net.

McKelvey could have scrubbed that one out but scuffed his lines when well placed.

FC looked content to hold on to what they had, with the experienced Oran McAuley brought on to try and see the game out. However, it went even better than that for FC as Buckley fed the tireless Aidy Scullion whose cross was finished off by Shea O’Brien at the second bite of the cherry.