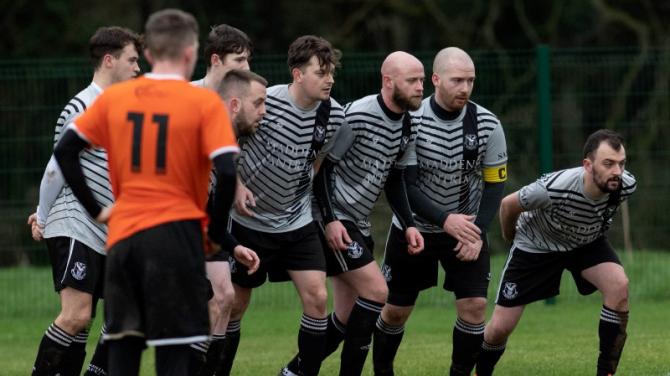 A WIN a long last for Sixmile Athletic, seeing off Ahoghill at the Forum in Round One of the Sammy Moore Cup.

Sixmile, remember, were 4-1 up against Woodside a couple of weeks ago, only to lose 4-5 - and manager Kevin Dennison feared that history could repeat itself on Saturday.

“Ahoghill were a better side than I thought, only this time we had the resolve to see it through.

“There was only one team in the game, it should have been sewn up by half time, but Ahoghill benefited from our goodwill gestures, of giving goals away.

“We’re always good for it, but as long as we won the game, that’s all that mattered! It helped too, that I was able to put out my strongest team, with the exception of maybe Adam Connolly.”

Sixmile altered their formation, playing with wing backs, and they got off to a flyer, practically straight to the kick off; Darren Elliott beating the stationary keeper to a Daniel Lewis cross.

The Ahoghill netminder, though, soon regained some brownie points, superbly tipping a Jay Wood effort onto the crossbar. Minutes later, Wood once more, without the assistance of the keeper, clobbered another one off the bar.

Athletic widened the margin on 35 minutes; Jamie Foster fastening onto Wood’s probing pass before lofting the ball over the onrushing keeper.

Two nil then at the break, but it was Ahoghill who were first to strike on the change around, profiting from some poor marking at a corner.

Athletic, nevertheless, had their chances, with Wood and Elliott going close, while the Ahoghill keeper pulled off fine saves to defy Foster and Lorcan McClean.

Foster, too, was out of luck with his effort pinged off a post.

However, extra time was starting to loom on the horizon until Sixmile regained their lead on 80 minutes, when wing back Sean Dowds stormed in to nod in a Kevin Latham corner.

Next Saturday, it’s the ‘revenge mission’, away to Woodside.

“We were 4-1 up against them, we know we can beat them, we just need to take our chances and stop giving silly goals away,” said the manager.