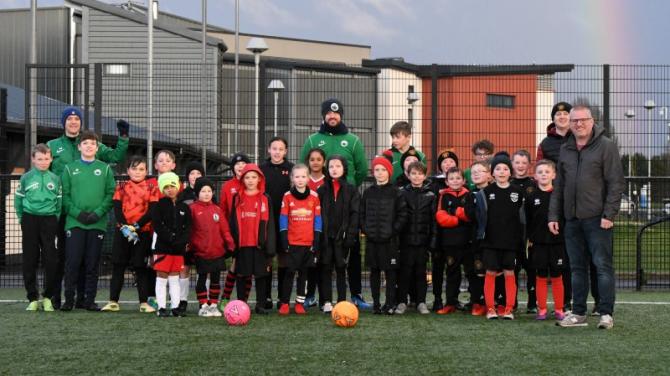 THE coaches, players and volunteers of Antrim Soccer Academy have brought underage football matches back to the town.

ASA have planned, organised and executed a 10 team tournament for the 2012/2013s age groups to play their games every Friday evening starting at 6pm in Allen Park.

This Soccer Programme ,which will have over 100 kids playing each week, will run for 12 match days until June 3 - with another 12 week Programme potentially starting straight after and into the summer based on local interest.

Teams such as Kells and Connor, Carrick Rangers, Antrim Rovers and Sammy McIlveen selections have entered this inaugural event enabling children of the local area and beyond the chance to learn and harness their skills in a safe controlled environment.

Sean Flood, the chairperson of ASA, said it was good to see the return of youth football.

“It’s great to see local children and parents being able to play or attend these underage fixtures in Antrim without having to travel to the likes of Belfast or further afield,” he said.

“Long may this continue.”

ASA have thanked Councillors Paul Dunlop and Neil Kelly for their massive efforts in getting this event off the ground from inception to delivery.

“Without them this Programme simply wouldn’t have happened,” said Sean.

“ASA would also like to give a massive debt of thanks to Deaglan Ó Hagan of Antrim and Newtonabbey Council who also offered great support in getting this programme off the ground.”