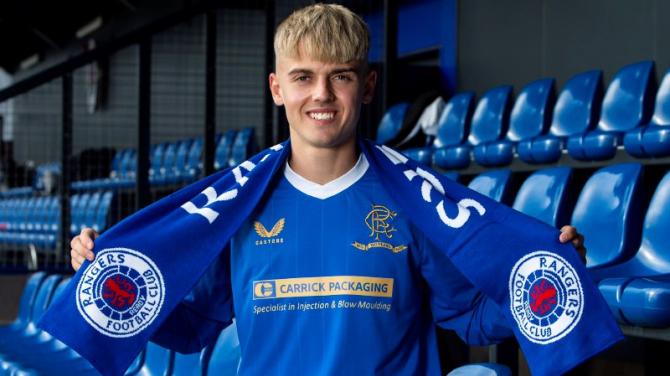 ANTRIM’s Ross McCausland has described his Rangers debut in Saturday’s 3-1 win over Hearts as a ‘dream come true’.

The local teenager, who has impressed with the Ibrox club’s B team this season, was brought on as a substitute for on-loan Manchester United winger Amad Diallo.

And the 19-year-old immediately made a positive impression, crossing for fellow teenager Cole McKinnon to fire home his first goal for the Light Blues.

Speaking afterwards, the local lad could barely contain his glee.

“Dream come true today making my debut for the club I’ve grown up supporting! Good way to end the season,” he wrote on Instagram.

And on his Twitter, he added: “Proud moment today making my debut for this great club.”

It has been clear for some time that the former Parkhall College student was a talent to watch.

He has represented Northern Ireland at U21, U19 and U17 level. The scouts were watching and he joined the Rangers Academy from Linfield in the summer of 2019.

He agreed a contract extension with the Old Firm giants in September, a deal that commits him to the club until 2024.

At the time, head of academy Craig Mulholland said they were pleased to have him on board.

“We believe that Ross still has lots of potential to realise and there is so much more to come from him,” he said.

“The modern game requires ‘1v1’ dominant players and this is a real strength that Ross has that we will look to enhance.

“He is a massive Rangers fan who is well supported by a strong family and we are all excited to see how he matures and develops as a player and person in the coming years.”

Rangers boss Gio van Bronckhorst rested a raft of senior stars in the final league game of the season ahead of Wednesday’s Europa League final with Eintracht Frankfurt.

On handing McCausland, McKinnon and Tony Weston their debuts, van Bronckhorst said: “We dominated against a very good side with a very young team so I’m really proud of my players, especially the youngsters.

“I told them once we pull on the Rangers shirt we’re expected to win the game and they accepted that really well.”

Pam Cameron MLA saw him in action at the weekend - and the DUP rep was impressed by what she saw.

“Huge congratulations to Antrim’s Ross McCausland who made his senior debut for Rangers in their win over Hearts,” she said.

The Steeple Defenders have also raised their glasses to the talented teen.

“We can now say we have an ex-member playing for Rangers!”

Local fans also took to social media to congratulate him.

“A great prospect for the future,” said one.

“The Northern Ireland team will be blessed with some outstanding young playters soon - and Ross is one of them.

“Fantastic getting his first game in the senior side in a very polished performance by all the young lads. Well done son.”