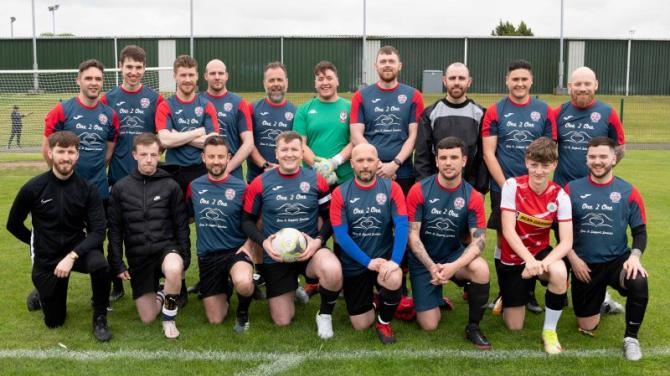 A VERY special game of football took place at the weekend as two sides came together to help raise funds for a local family and their conjoined twins.

The Allen Park Legends took on Holywell FC at Antrim Forum in aid of Annabelle and Isabelle Bateson.

Charlie McNally, who organises a five-aside football with my mates three times per week at Allen Park, helped organise the event and said that the money will help towards paying for the girls separation operation and supporting the family as they travel back and forth from London.

He even scored a hat-trick in the game, which saw the Allen Park Legends win 5-4, with over £400 raised so far, with more donations expected in.

Annabelle and Isabelle Bateson were born joined from the chest to the pelvis at London’s University College Hospital. They have separate hearts and share a liver, bladder and bowel, have one leg each and a shared fused leg.

Proud parents Hannah and Dan, who live outside Toome, are now preparing for separation surgery for their ‘miracle’ babies.

Hannah said: “The girls went to their first football match!

“We would like to say a big thank you to Antrim Legends and Holywell FC for inviting us along to their match. They very kindly donated the proceeds of their charity match to the girls’ fundraiser.

“Once again Dan and I are totally overwhelmed by how kind our local community have been to us and our wee ladies.”