She shoots, she scores! Antrim's own Joely Andrews picks up Footballer of the Year award 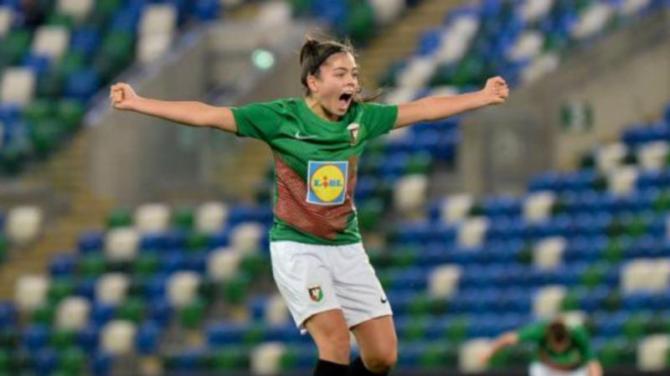 ANTRIM Grammar alumni and soccer star Joely Andrews is celebrating after being named the Women’s Player of the Year at the Ulster Footballer of the Year (UFOTY) Awards, sponsored by Belfast Audi.

Only just turned 20-years-old, the midfielder has won multiple trophies with Glentoran, made her Northern Ireland senior debut, scored at international level and has faced England at Windsor Park.

Joely is now looking towards the European Championship finals with Northern Ireland in the summer.

With a love of Manchester United, Joely first got into the sport at Antrim Primary School, joining the Glens when she was eight-years-old, featuring in different positions before settling into her midfield role.

Two years ago, she realised her dream of playing for Northern Ireland.

In April she took part in the 5-0 defeat to England in World Cup qualifying in front of 15,000 fans at Windsor, just days after she scored her opening goal at the highest level versus Austria.

Speaking back in 2020, she said: “When I started playing football, it was just after school for fun,

“Once I got into the county excellence programme I realised I’d love to play for Northern Ireland one day.

“I used to play hockey at school and was in the Ulster Development squad at U15 level, but had to make a decision between hockey and football so chose football.

“I still played hockey right up until I left school and really enjoyed it.”

But now she is playing on a much bigger stage, and making memories along the way.

“My personal highlight would have to be getting my senior international debut in our 6-0 win over Faroe Islands back in September.

“It was a massive win for us and gave us loads of confidence going into the next game against Belarus.”

At the same time as studying for her AS levels, Joely was training to go to the Elite round of the U19 European Qualifiers.

“Balancing school and training was difficult sometimes as both were very time demanding but thankfully I was able to manage!”

She also took part in the qualifiers for the Elite Round of the Under17 Euros.

“Playing for Northern Ireland is amazing.” she said.

“There is a great team atmosphere, I love being around the girls and it is fantastic to represent your country,

“Starting against England at Windsor is something I’ll never forget. It was so special.

“Nobody, including myself, would have thought something like that was possible so to get the opportunity to be on the pitch was incredible. The result wasn’t what we wanted but there was a lot we can take from that game into the summer.”

“Since Kenny has come in, we have come on leaps and bounds and it was a massive achievement to qualify for a major tournament,” she said.

“Kenny has given our group of players so much. He has made us believe in ourselves and we can’t thank him and the coaching staff enough for all they have done.

“I can’t wait for the tournament. I am lucky because when I came into the squad, I made my debut in the campaign in which we qualified so I got an easier route to a major championships than a lot of the other girls.

“Some have been around for 15 years and have waited a long time for this.”

Studying Psychology at Ulster University in Coleraine, Andrews lauds parents Alison and Mark and sister Zoe for their support, adding that one day she would welcome a shot at full-time football across the water, stating:

“That’s an aspiration of mine to go and get the experience of playing semi-pro or pro though right now my focus is on Glentoran and an exciting summer with Northern Ireland.”

“The best piece of advice I have ever received is ‘hard work beats talent when talent doesn’t work hard’.

“I think it was my dad who told me that. It basically means that no matter how talented you are it’s no use unless you are committed and work hard to fulfil your potential.”

Joely said that the future is ‘really bright’ for the women’s game in Northern Ireland.

“It would be great to see some of the teams in the league go semi-professional or even professional!” she said.

“Hopefully participation will continue to increase and more young girls will get involved as well as support for the league growing with more media attention and fans at matches.

“Certainly support, like that from Electric Ireland’s Game Changers campaign is really making the difference in getting young girls to take up the sport and encouraging fans to get involved.

“For me I would love to play professional one day but we will see what the future holds.

“Qualifying for a major tournament with Northern Ireland would be unbelievable and I think we are on the right track to getting there.”