Northern Ireland slip up against Greece 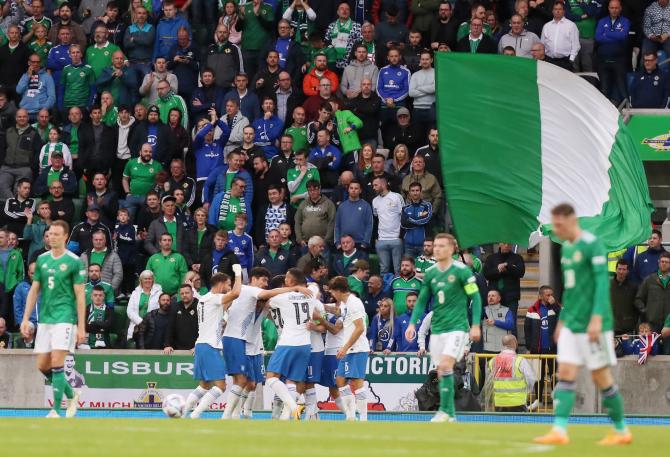 Greece celebrate after scoring to make it 1-0. Pic: Jonathan Porter/PressEye

A tepid Northern Ireland performance got exactly what it deserved as their miserable run in the UEFA Nations League continued.

Ian Baraclough's side has failed to win in their last 11 outings in the competition, a run they had hoped to put right in a group many would have thought they would have a chance of topping.

They have also now won just once in their last 13 games at Windsor Park.

The visitors took a lead they would not lose on 40 when they caught Northern Ireland on the counter-attack. Dimitros Liminos found Anastasios Bakasetas and he made no mistake, finishing under Bailey Peacock-Farrell.

The first chance of the game had fallen to Gavin Whyte with less than 20 minutes on the clock, having spun on the edge of the box before firing low at Vlachodimos.

There wasn't much else for the Windsor Park faithful to cheer about in a first half which was largely forgettable.

Liminos almost created a second for Greece when he bombed down the right win and put a perfect ball in front of Peacock-Farrell and the onrushing Georgios Giokoumakis, but the Celtic striker just couldn't connect. If he had, it almost certainly would have been game over for Northern Ireland.

Barraclough introduced Kyle Lafferty and Niall McGinn just after the hour mark, hoping the veterans would make an impact.

And within five minutes the pair had combined to create a chance, Lafferty winning a header which eventually fell for the Dundee player, but his sidefooted effort was plucked out of the air by the goalkeeper.

With five minutes to go Lafferty struck a free kick from 20 yards out which curled towards goal, but was ever so slightly high and wide.

Better will be expected on Sunday when Northern Ireland take on Cyprus on Sunday (5pm kick-off).