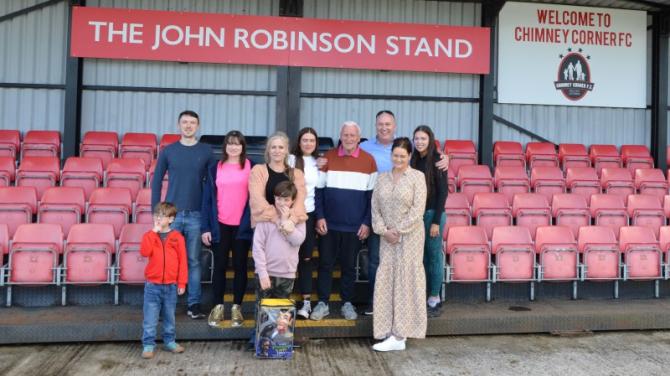 IT’S always joked that Brantwood man John Robinson is part of the furniture at Chimney Corner FC - and now that has never been more true, after a stand at the home ground was named after the perennial public relations officer this week.

John was joined by family, friends and club supporters and dignitaries for the official unveiling of the renamed stand.

His name was already synonymous with the Castle Road side - and now it’s permanent!

With pen and paper in hand, home and away fans will recognise John from his shock of white hair, darting up and down pitch-side to compile his weekly reports for the Antrim Guardian.

A firm fixture in the town - and its fringes - over the last 65 years, Corner broke the mould, starting out with a committee who - rather than a manager - selected the team.

Founder member and former Antrim publican, Jack Blair happened to gaze upon Pogue’s Entry in 1952 and immediately thought of a well-known book written by a famous past resident of the 19th century stone cottage.

The author was Alexander Irvine and the book was his best known work, ‘My Lady of the Chimney Corner’, which recalls his early life in the town.

The landmark could also be seen from the original home of the football club at Riverside and it was here that Chimney Corner first went into action in the 1952-53 season.

The club achieved remarkable success under the committee system and this continued with the introduction of inaugural manager, Jim Buckley in the early 1970s.

Over the next 30 years, successors including Armie Beckett, Alec McKee and Laurence Stitt ensured that Chimney Corner was one of the finest sides in Northern Ireland football outside of the Irish League.

The club began life in the Amateur League and claimed its first trophy in 1954 by winning the Division 2C title.

Corner have also enjoyed numerous successes in what is arguably the blue riband competition in junior football - the Steel and Sons Cup.

And they have had the honour of a similar number of inscriptions on the IFA Intermediate Cup.

Other successes came in the form of the Clarence Cup and the Walter Moore Cup competitions.

The club underwent huge changes when it moved from its Riverside home to new grounds on Castle Road.

The original venue was a veritable fortress for the team which swelled with up to 1,000 spectators who came to see the Reds in action in big cup ties and regularly welcomed 200 to 300 supporters for home league games.

Outside of his lifelong support for the team, John Robinson was one of Antrim’s best known milkmen.

He started in 1969, back when there were only two types of milk - pasteurised with a silver top and Grade A with a green top and extra cream.

“Up to the late 50s, a lot of milk deliveries were done by horse and cart.” he said.

“In the Co-Op, one of the biggest dairies, all of the horses had their names outside their stables.

“After that, electric vans or floats came on the scene.

“At the Co-Op, children used to love helping the milkman, sometimes there were 20 boys waiting outside at 4.30am waiting to get picked up, so I started as a docket boy and went round with the milkman, as he collected the money I asked the customer for a share number - some people know their number off by heart to this day.”

Customers then got their ‘divi’ marked up to date in their share book.

In the 60s and 70s, all children under five years old got one pint of milk free, seven days a week.

Up until 1982, every primary and nursery school pupil got a third of a pint of milk free.

John said that milkmen had a vital link to the community and were involved in numerous charity collections.

They also had a role as an unofficial neighbourhood watch, when customers were away on holiday, noticing anything unusual.

“Being out early in the morning, you were always first to see any strange activity. We always looked out for older folk living alone or out in the country.

“If there was a bottle untouched at the doorstep the next morning, you knew to contact the authorities.

“Sometimes we were their only visitor during the day and they would love to see you arriving to have a wee chat or ask for the paper to be delivered or ask you to pop something in the post for them or pass on a message.

“There were no mobile phones in those days.”

“People used to say that I was their mammy’s milkman when they were born and now they are married and have their own families.

“Children would say, when they grew up, they wanted to be a milkman too!”

With the advent of the big supermarkets and the change in packaging to plastic and Tetra Pak, milk delivery may seem like a thing of the past, but Antrim remains fortunate to still have a doorstep delivery.

As well as giving talks about his former job, John also keeps a collection of old bottles which he puts on display around the borough.

He has 150 bottles from around the UK and even the USA, including some with branding, including Punjana tea, Cadbury’s, Kellogg’s, Pepsi Max and Virgin Music.

Fittingly, one of his favourites includes the names of the Irish football quad from the Italia 90 World Cup!