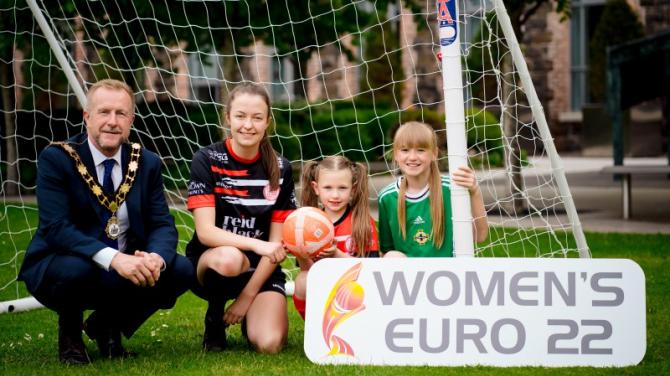 NORTHERN Ireland senior women’s captain Marissa Callaghan has urged football fans to come out and show their support by watching the team’s Euro 2022 games on big screens across the Borough.

To celebrate the historic sporting achievement of the NI team as they compete in the group stages of the UEFA Women’s Euro 2022, Antrim and Newtownabbey Borough Council is hosting fanzones to screen the matches live at Mossley Mill and Antrim Castle Gardens.

These screenings will cater to fans of all ages, with a fun family atmosphere featuring bouncy castles, face painting and entertainment.

“As a resident of the borough I am delighted that the Council will be screening the Northern Ireland Women’s Euro games, and I would encourage people to come out and show their support,” she said.

“I am incredibly excited and honoured to be leading out this great group of players and to be representing our country.

“Hopefully we will do the people of Northern Ireland proud and inspire both boys and girls to play the beautiful game.”

“I am pleased the Council is getting behind the Northern Ireland Women’s Football team by hosting these live screenings across the Borough, giving local people a chance to come together and celebrate this tremendous achievement,” he said.

“As has been demonstrated many times before, Northern Ireland has some of the best fans in the world and I know they will show their support for this team as they head to Euro 2022.

“These talented players are a credit to our country and I wish them well.

“Whatever happens, they have already done Northern Ireland proud.”

Northern Ireland’s group matches against at Norway (July 7) and England (July 15) will be screened at Mossley Mill, while the game against Austria (July 11) will be shown at Antrim Castle Gardens.

A limited number of tickets for the fanzones will be available to book on a first-come first-served basis. While tickets are free, a £1.25 booking fee will be donated to the Mayor’s chosen charities.