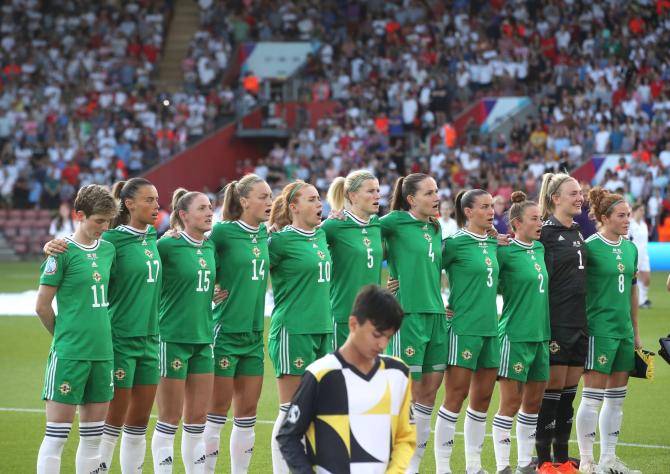 The journey is over for Northern Ireland's women at Euro 2022.
They were soundly beaten by tournament hosts and one of the favourites, England, at St Mary's Stadium.
Kenny Shiels' side started brightly and Lionesses shot stopper Mary Earps had to be alert to deny Lauren Wade after she had burst past Rachel Daly.
England were then awarder a penalty when the ball hit Laura Raffery on the arm, but after a VAR check the referee changed her mind.
Wade went close again later on when she was foind by Kirsty McGuinness, but her shot was straight at Earps.
However, it was England who were in the ascendancy and a cracking goal by Fran Kirby broke the deadlock. She fired the ball into the top corner past Jackie Burns.
Northern Ireland had held out for 40 minutes before the deadlock have been broken, but almost as soon as the first school had gone in the second one soon followed. Beth Mead found the net when the visitors' failed to clear a corner.
Alessia Russo then bagged the brace, firstly, when she scored the touring header from a Mead cross, and then when Ella Toome fed the ball through to her on the edge of the box. She spun before finishing low past Burns.
An own goal by Kelsie Burrows rounded off the scoring, the ball looping over the goalkeeper after a cross had bounced off her leg.
While the Green and White Army will be coming home without any points on the board, they will no doubt come home content that they have raised the profile of the women's game here by simply achieving qualifying for the finals. There will surely be calls to ensure that the IFA invest in the future of women's football so that 2022 will not be a one-off.