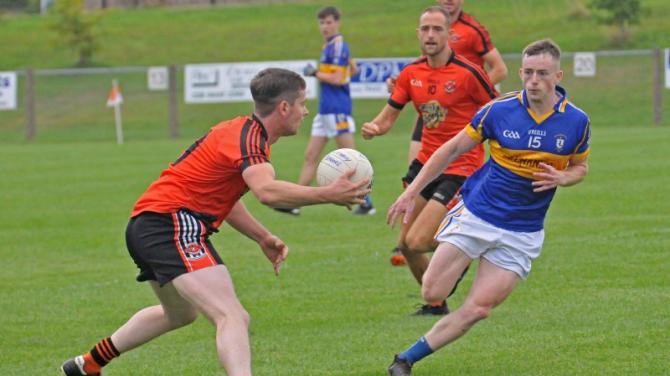 WHEN these two sides met three weeks ago Rossa’s Thomas Morgan brought the sides level in injury time with an excellent point.

This time Patrick Gallagher broke the Belfast side’s hearts with a well worked goal which put his side two points up four minutes into injury time to give his side two valuable points in Division One of the O’Neill’s Antrim Football League.

This game was very important to both sides who found themselves at the wrong end of the table with Rossa on five points and their hosts on three.

The old saying that goals win games was never truer than with this result.

Rossa probably thought they had the game won when they were a point up with time almost up but got hit with a sucker punch goal at the end.

The Lough view side would have won this game much easier if they had taken half of the chances that came their way - the wide count was well into double figures.

With so much at stake the standard of play was poor but for Colm Fleming’s unerring left foot with seven pointed frees and three from play was the only shining light on a dull afternoon.

Play was broken up far too often with sloppy tackling.

Rossa were really up for the game and took the home side to the cleaners with four unanswered points.

Colm Fleming split the posts for the first of his ten points. Sean Finch finished a great move with a point. Sean Fleming added two points, one from play a pointed free.

Slowly the orangemen pulled themselves back into the game and were rewarded with a goal which started from Fergal Green’s kickout.

The Shaws Road side came at the Hill side’s defence who were guilty of some unnecessary frees which were punished by the accuracy of Colm Fleming.

Fleming pointed two frees from around the 45 metre line to put his side back in front again.

Oisin Clicker got on the score sheet when he stole in unmarked and added a point.

Colm Fleming extended the lead with a point from play.

Niall McCann closed the gap to one with a point from an acute angle.

Domnic McEnhill finished the first half with a well worked point to leave it 2-2 to 0-10.

After the break, the home side brought in Owen Gallagher and Malachi Doherty.

Doherty was immediately into the action when he pointed a free. Play was a lot better in the second half with both sides going for scores.

The home defence got their act together and gave away less unnecessary frees.

Glenavy’s full-forward Domnic Gallagher took full advantage of a poor kickout from the Rossa keeper when he intercepted the short kick and finished with his second goal.

With the sides level and time running out, the next score was vital and it fell to Glenavy when Owen Gallagher finished his strong run with a point.

Once again that man Fleming was breaking Glenavy supporters’ hearts with a pointed free to put his side one up as the time moved into the red.

Patrick Gallagher at fullback moved up the pitch, took a pass and went on one of his famous solo runs and placed a beauty out the keeper’s reach.

Now two up and with time almost up the crowd home got one last scare when Rossa mounted a full-blooded attack.

The defence stood firm this time and Domnic Hill had to be satisfied with a point.

The final whistle blew with a sigh of relief from St Joseph’s faithful.

With the teams above these sides winning this win may not be enough to save them.