Cargin win - but their league hopes have surely vanished 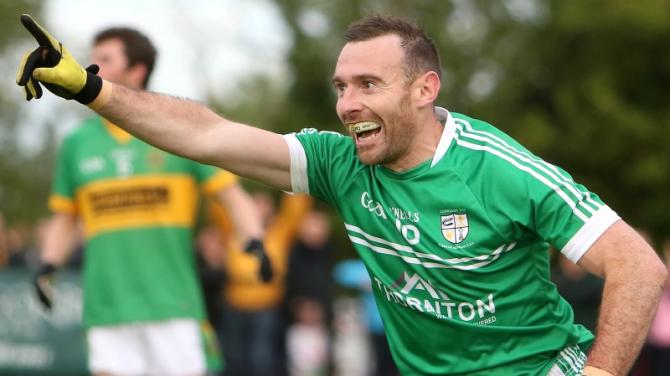 Title contenders St Galls and Creggan, each with a one point advantage and a game in hand look likely to relieve the Erins Own men of their crown.

With a victory against the Toome side already secured this season, Casement’s began in confident mood but were lucky to survive when Justin Crozier blazed wide.

The opening score fell to the visitors when Michael Hagen sent a 30-yard free between the posts and Paddy Kelly’s fine effort from an acute left sided angle doubled the tally.

Cargin drew level by the seventh minute when Tomas McCann punished an indiscretion on the incoming Tony Scullion and a Jamie Kennedy clearance opened the way for Justin Crozier to follow suit.

An immediate response from Portglenone saw back to back points from Niall McKeever restore their two-point advantage.

The O’Cahan Park side certainly meant business with Dermot McAleese on the end of two good scores to send them ahead, 0-4 to 0-2.

Jamie Gribbin’s delivery sent Kieran Close away for a fine point in the 12th minute and when Michael McCann was impeded his sibling Tomas gained retribution with a point from the placed effort to tie matters.

The visitors were having none of it, Paddy Kelly firing over from the left hand side and Conal Delargy planting a gift goal in the corner of the empty net.

Now with a four-point advantage Casements should have pushed on but corner forward Oran McAuley proved their downfall finishing a great Paul McCann cross to the net with Tomas McCann converting a free to again even it up at 1-5 each with ten minutesof the half remaining.

The visitors regained the lead a couple of minutes later when Michael Hagen fired over but the Toome lads were quick to return fire again and good combination play by Tony Scullion, Jamie Gribbin and Tomas McCann set up Oran McAuley for his second goal.

Conal Delargy replied with an excellent 26th minute score to reduce the Cargin advantage before a Jamie Gribbin lay-off opened the way for Oran McAuley to collect a point three minutes later.

However, the visitors had the last say as an injury time Conal Delargy point ensured the home side went in a point ahead at 2-6 to 1-8.

Cargin started the second half with back to back points from Kieran Close, making a welcome return and the in-form McAuley for a three-point advantage.

The home side had opened up a three-point lead and looked good but a charge led by Corey McLaughlin and Ciaran Mc Kenna saw Casements again in front 1-13 to 2-9 at the end of the third quarter.

An epic finish was on the cards and Cargin didn’t disappoint, Tomas McCann responding with two points and they had again crept ahead.

Portglenone battled to repel the incessant tide of green and white but to no avail and when full back Shane Delargy entered the referee’s notepad for a second occasion they were reduced in number with Tomas McCann steering over the resultant free.

Cargin were dominant in the closing minutes with a Paul McCann goal and injury time Oran McAuley point making it an eight-point victory, an unlikely winning margin for most of the game..