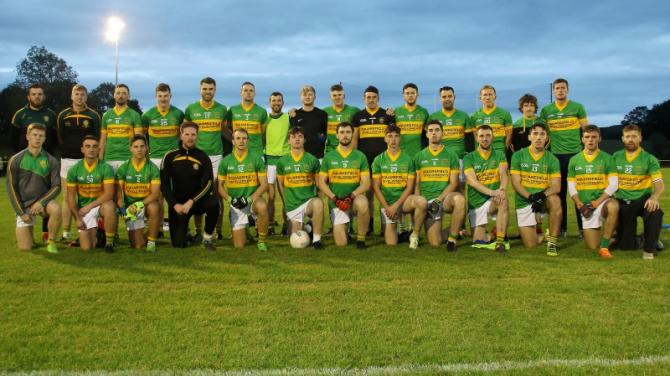 CARGIN’S domination of the South West senior football championship came to an end when neighbours Creggan wrestled the O’Cahan Cup from their grasp in a fiery contest at Portglenone.

A couple of second half goals saw Kevin Madden’s men collect their first silverware of the season and break a monopoly of O’Cahan Cup domination which has lasted what seems like an eternity.

In a clash of great intensity which saw the referee, Kevin Parke a busy man, three Cargin players and one Creggan player were dismissed in the course of the hour, as both sides fought tooth and nail to the bitter end.

Cargin began in style although the opening quarter was a drab enough affair with scoring at a premium, the sides tied at two each at the halfway halt.

Michael McCann raced away through the middle right from the throw-in to see the holders stamp their authority on the game and brother Tomas converted a free soon after to put the Toome men two ahead.

However, the scores soon dried up and Creggan began to feel their way back in.

A couple of Kevin Small points in quick succession saw Kickhams back on terms by the eighth minute but then the well ran dry for both teams as defences took control and a 20-minute plus barren spell followed.

While Cargin may have had the majority share of the possession stakes, wayward finishing cost them big time although the Creggan defence deserve great credit for the manner in which they thwarted the opposition’s attack.

A Tomas Mc Cann late ‘45’ came close to breaking the deadlock after a bizarre series of events saw the ball come back off post and crossbar before being cleared to safety.

Creggan in turn were limited in opportunities in the second quarter in which the Cargin central pairing of Michael McCann and Kevin McShane held sway but they likewise were guilty of poor finishing and, as a result a two each interval score line was poor return for all the effort put in by both teams.

The drab nature of the first half soon disappeared on the restart with Creggan breaking quickly and Kevin Small delivering a score to give Creggan a slim advantage. He followed with another from a free and suddenly there was a two-point gap between the sides.

Cargin responded immediately with the recently returned Ciaran Close on the mark but the same cannot be said of some of his colleagues as they continued to fire blanks.

Creggan were not without blame either in their attempts on target but corner forward Liam Quinn did race away on the right hand side to take their total to five with Close the responder a minute later.

As the end of the third quarter approached the Kickhams were dealt a body blow when Kevin Rice saw red following a heavy challenge on Michael McCann and this could have cost them big time.

Instead they turned the game on its head with back to back goals and a seven point lead.

A cute Conor Small fisted cross opened the way for the advancing Ruairi McCann to come from his defensive station to palm to the empty net and when Liam Quinn grabbed the loose leather in front of the posts, after the Cargin rearguard had dithered in their clearance, the nippy corner forward blasted to the back of the net also.

Now with a 2-5 to 0-4 advantage, Creggan had one hand on the trophy but this game was far from settled as Jamie Gribbin raced away on the right hand side to score followed by another converted free from Tomas McCann as the scores began to flow.

Despite being a man down Creggan came back in style with replacement Matthew Rodgers on target and a six point advantage was beginning to look good as the clock ticked down.

Another exchange followed with Close tapping over his fourth point but as Creggan held on tenaciously, Kevin Small delivered at the other end.

Creggan now enjoyed a healthy 2-7 to 0-8 advantage with the events of the next minute ensuring their success when not one but two Cargin players, Michael and Gerard McCann were red carded following an incident which involved players from both sides.

And worse was to follow for the champions when seconds later Donnach McKeever was shown a second yellow and to all intents and purposes the contest was as good as over.

Creggan should have coasted home with their five-point advantage but the champions had no intention of letting them have it easy. Led by Tony Scullion and James Laverty and a pointed free from Tomas McCann at the end of ordinary time, the 12 remaining Cargin players continued to apply pressure.

Close pointed another free for the defending champions two minutes into injury time and with only a goal now separating the sides, the big following at Portglenone were on tenterhooks.

The Toome men continued to press for an equalising goal in the remaining minutes of injury time but the Ricki Johnston inspired Creggan rearguard stood firm as the O’Cahan Cup moved a few miles up the road.

This was a huge victory for the in-form Creggan men who lead the way in the race for the division one title and they will approach their upcoming championship campaign in a positive frame of mind.

And while Cargin will be disappointed to have lost their grip on the O’Cahan cup, there is little doubt that Damien Cassidy’s charges will be better prepared for their championship challenge ahead.