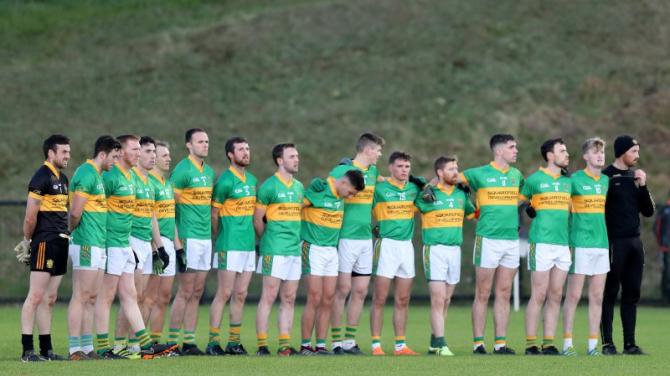 CREGGAN came out triumphant in this Football Championship quarter final with a 17-point victory.

They were never forced out of second gear in the quarter final senior football championship tie at Ballymena.

The Creggan men went on to lead by five at the break and when midfielder Kevin Small grabbed the first of his team’s four second half goals four minutes after the restart there was no doubting who would advance to the semi-finals.

Conor McCann, who had a fine game at midfield for Creggan, opened his team account on four minutes after picking up a pass from Odhran McLarnon and two minutes later McLarnon grabbed his team’s second.

Centre forward Kevin Small set up overlapping half back Ruairi McCann for his team’s third in the eleventh minute and when the Creggan men won the kick-out Oistin McAteer raced up from corner back to add the fourth.

It was 0-5 to nothing by the thirteenth minute when Odhran McLarnon sent Kevin Small through for a well taken score and though the scoring dried up for the winners it was a further eight minutes before Ahoghill registered their first score of the game with a pointed free from PJ O’Connell.

After such a long wait for their opening score the St Mary’s men followed with an other within second when full forward Donal Graham took advantage of a poor kick out to double their total.

Creggan hit back immediately when Odhran McLarnon finished a good move with a point at the other end but Ahoghill proved that they were still a threat, when just before the break, they nearly had the opening goal of the game.

Patrick Graham won possession on the edge of the Creggan square, but even though he hit his shot well, goalkeeper Oisin Kerr was equal to it and the danger was cleared.

Creggan took advantage of this miss when Liam Quinn cut in along the end line and fisted over a point and when Keven Small added another his team were 0-8 to 0-2 clear.

Ahoghill came back with two quick points in injury time to cut the gap to four but Small struck again with the last kick of the first half to give Creggan an 0-9 to 0-4 lead at the break.

Five points down as the second half began Ahoghill certainly were not out of it, despite the vast difference in possession, but they needed a good start which they failed to make.

It was the Kickhams side who continued to produced the goods and two Kevin Small points and a brilliant goal from midfielder Kevin Rice all but ended the contest.

Donal Graham managed an Ahoghill point six minutes in but Creggan’s second goal came a minute later when Kevin Small found his brother Conor unmarked to the right of the Ahoghill goal and the full forward finished expertly with his left foot.

Ahoghill battled away against the odds and PJ O’Connell and Eoin Graham pulled a couple of points back but further goals from centre back Conor beag McCann and substitute Matthew Rodgers left a massive and convincing seventeen points in it at the end.

With a couple of games remaining they head both St Gall and Cargin for league honours and with the O’Cahan cup in their trophy cabinet after years of waiting, Kevin Maddens side are the dark horses for this years championship crown after a sixty four year wait. They meet St Johns, winners over St Teresas, in the semi final.