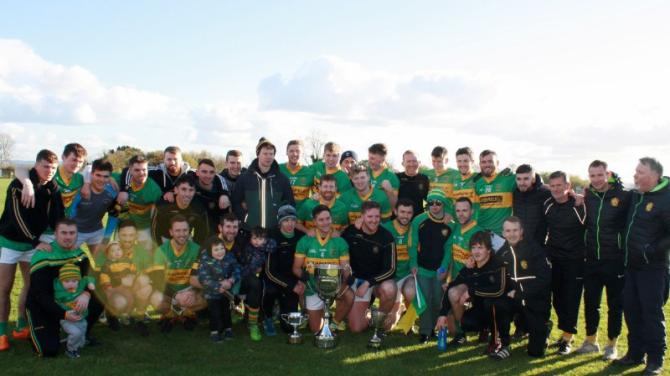 WHAT a difference a week can make.

Just six days previously Creggan were devastated when they lost the senior championship by a single point to neighbours Cargin, but in thi,s their final game of their Division One campaign, they claimed the league title.

Many a side would have thrown their heads in the air after defeat in a championship final but full marks to Kevin Madden and his merry men to get their act together so quickly and beat Portglenone by seven points.

With 16 games played they emassed 28 points to end five ahead of Cargin.

While St Gall’s, St John’s, Hannastown and Portglenone have each a game left to complete their programme and with 22, 19,16 and 14 points to their credit respectively, their race is also run.

Kickhams certainly dusted themselves down and knuckled down to the task in hand, and after dominating the first half they led by 1-8 to 1-1 at the break.

The Creggan goal coming from Paddy Coey, while Niall McKeever was on target for Casements.

After the change of ends the visitors upped their scoring rate with a series of well taken points but Creggan always had the upper hand and further goals from Kevin Small and Fintan Burke saw them run out winners by 3-12 to 1-11 to seal the deal.

The last time they won the senior league crown was in 1961 with the championship has eluded them since 1954 but credit to the club who are within striking distance of both.

Perhaps the double will come their way next season.

After the game county chairman Collie Donnelly presented the magnificent Eddie Fitzsimons Memorial Cup to Creggan captain Conor McCann. The trophy caps off a very good season for the Kickhams, having already secured the Senior Reserve Cup and the O’Cahan Cup.