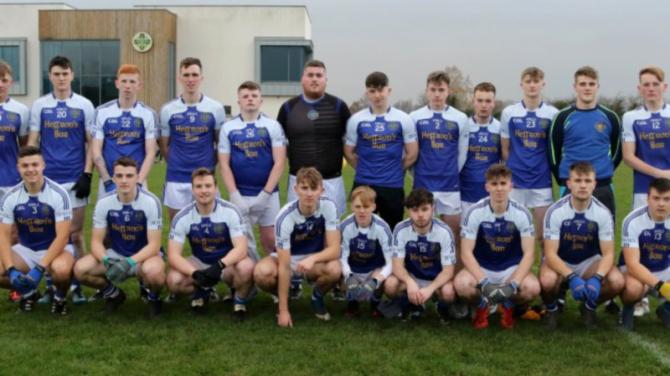 THIS Under 21 football game decided the future of both sides.

Tir-na nOg recorded their second victory in group two to ensure they will participate in Grade A of the championship while Glenravel, having completed all their three group games and won just one look destined for Grade B.

While eleven points separated the sides in the end, it took the Whitehill side some time to settle.

Once they got the feel of it, last season’s B champions were halted in their stride by the Glenravel goalkeeper Conal Kerr who denied them on a number of occasions.

The home side started the second half as they had finished the first and despite losing Emmett Murray to injury, they were ahead by nine after 10 minutes.

Despite the best efforts from the Glensmen solid defending, a Ciaran O’Neill effort marked the end for the Con Magees although they did add a couple of late points.

Tir na nOg were always favourites in this one after defeating Cargin in a midweek clash and that is exactly how it panned out.

Eamon Og McAllister opened their account in the second minute with Glenravel responding through Eoin Hynds.

Another exchange saw Aaron McNeilly and Odhran McAleenan exchange points making it two each after 12 minutes before the home side stepped on the gas with Emmet Murphy, Aiden Toland, Dara Feagan, and Aaron Mc Neilly taking them to 0-7 to 0-2 with eight minutes of the half remaining.

Damien Hagen’s side looked in charge and only a few missed opportunities and the intervention of the Glenravel keeper Conal Kerr, who stood tall on a couple of occasions to deny Aiden Toland and Aaron McNeilly, kept the Con Magee’s in touch.

The visitors added a point to their total in the twenty fifth minute after their net minder made another excellent save with the clearance opening the way for Aiden O’Donnell to split the posts and when mid-fielder Eoin Hynds followed Aaron McNeilly’s lead with another for the Glensmen they were still in the hunt at 0-4 to 0-8.

Tir na nOg started the second half with a couple of early scores from the excellent Emmett Murray but although the corner man was forced out of the action shortly after, the home side were on the march.

Ciaran O’Neill was leading by example in the blue and white and it was after a brace of points from Barry McCormick and another from Dara Feagan that the 17 year old was much involved in a sweeping movement which saw him finish to the net and the Whitehill boys were 1-14 to 0-5 ahead and it was over.

The Randalstown lads looked in for another major shortly after as centre back Darren McCormick got on the end of another well laid approach but the Glenravel keeper came to his side’s rescue once more.

The home side eased up in the latter stages taking opportunity to give game time to the ‘bench’ and a further point from replacement Dean Wright and a couple from Glenravel’s Aiden O’ Donnell and Darragh Donaghy brought the inevitable to a close.