Moneyglass make it to U21 final 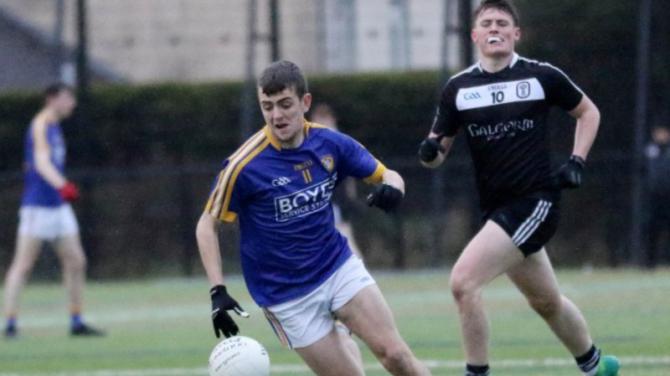 A COUPLE of goals each from Pat McCormick and Dermot McErlean were the scores which ended All Saints’ ambitions in the Under 21 football Championship.

This semi final, played at Crumlin, saw the St Ergnat’s men always in control with the goals doing enormous damage in line to the Ballymena side’s wasteful finishing.

Little separated the sides in the opening phase and they were tied at 0-2 apiece as the opening quarter ended but an interval score line of 2-5 to 0-3 told its own story.

Despite the wet and windy conditions, All Saints were first away with James Mc Donnell on target in the third minute with Moneyglass replying promptly from midfielder Michael McLaughlin.

Shea O’Brian followed with a sixth minute pointed free to see the Ballymena boys nip ahead and when a Ben Hamill reply was quick to follow in a lively opening phase, the shivering attendance probably anticipated more of the same to follow.

All Saint’s should have been ahead at the end of the opening quarter but the tenacity of the Moneyglass defending and dreadful finishing from score-shy forwards told a sad tale.

The All Saints wide ball tally had reached a handful by the fifteen minute mark and when another approach was halted with the intervention of the Moneyglass full back Sean Kelly, the Ballymena side were to pay a heavy price.

His clearance set in motion a move which saw Tiernan Duffin, and Jack McCoy involved before Peter McErlane fired to the net after sixteen minutes.

Another earlier goal from defender Pat McCormick had Moneyglass in a healthy position at 2-2 to 0-2 but back came the Ballymena boys as Matthew Downey’s intervention at the back opened the way for the hard working Brendan McDonnell to grab a point.

While the corner forward put in an excellent shift, he spurned a couple more excellent chances which could have changed the complexion of the game.

Moneyglass were proving much more efficient in their finishing and points from Jack McCoy after twenty four minutes and another from Conal Prente saw them open up a gap.

It got bigger before the break when a Jack McCoy point left them with an eight point advantage at the break, 2-5 to 0-3 and looking all over winners.

In contrast to their opponents, All Saints continued to fire blanks and despite quite a few chances in the latter stages of the half, they had nothing to show for their efforts as their wide total hit double figures.

On the restart, All Saints got into action early and secured a couple of early scores.

Brendan Mc Donnell and Shea O’Brien scored good points but Moneyglass always had a trump card and after just seven minutes, defender Pat McCormick delivered his with his second goal of the game.

The All Saints retaliated with another Shea O’Brien point from a long range free and when Bendan McDonnell added another at the end of the third quarter, there was a glimmer of hope for the Ballymena side.

Moneyglass, however, were prepared to let things drift no further and another goal put the tin lid on it.

Eamon Kelly made an interception at the back and Michael Mc Laughlin made delivery to Dermot McErlain who seized the opportunity to round his marker and find the net for an eight point advantage, 3-6 to 0-7.

To all intents and purpose this semi was over but there was still some fight in the Ballymena men.

Shea O’Brien knocked over his third and Moneyglass keeper Gary Murray was called on to make a couple of interventions in the latter stages.

And just when they looked to be making progress, St Ergnat’s struck again, with corner forward McErlain banging home his second goal to seal it.

While Ballymena had the final say from O’Brien at the end of ordinary time, they can have no complaints as Moneyglass strolled to the final where either Hannastown or Glenravel will provide the opposition.