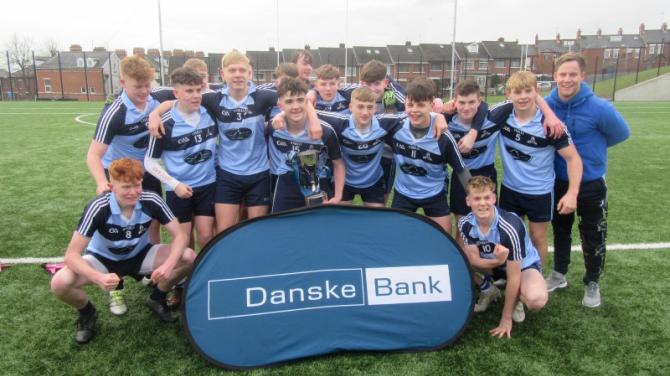 DESPITE having lost two previous Ulster finals and being written off by certain quarters, the St Benedict’s team ended an Ulster Championship drought and claimed top honours in College Football for the first time in eleven years.

Not since 2007 had the College lifted a Senior Title but at a bitterly cold Colaiste Feirste, the boys from Randalstown added their names to the provincial roll of honour, getting the better of the Down Champions, De La Salle Downpatrick with a 5-10 to 3-8 final score.

It was an excellent game of football that showcased everything that is good about a national sport.

In a hard and extremely skilful encounter, both teams found it difficult to land a decisive blow in the first half.

However a tactical switch that saw Sean McAllister move to full forward in the second half proved to be a masterstroke as he slotted home a hat trick of goals to secure a famous win for the County Antrim College.

Connor Hastings and Conor O’Kane tackled and harried in a style reminiscent of their coach Kieran McGeary while Aidan McErlain, Captain Caolan O’Loan and the majestic Sean McAllister were the score getters who carried the team to victory.