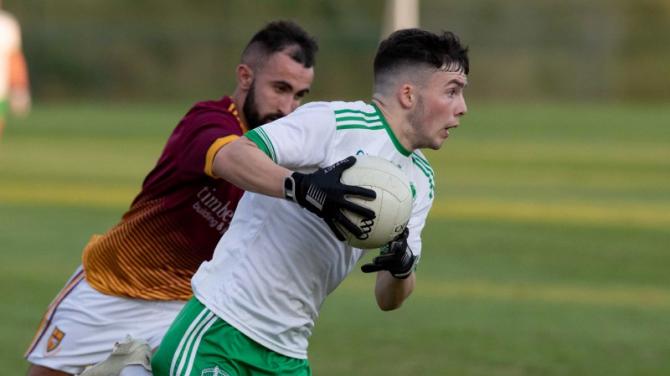 ST Comgall’s have been knocking at the JFC door longer than they care to remember and this week they got the 2021 campaign off to a good start with a win over familiar rivals, O’Donnell’s in Antrim.

Naomh Comhghall got off to a good start with points from Tom Patchett in the third and fifth minutes before the visitors struck with a goal in the 7th minute to take the lead.

Naomh Comghhall responded with points from Paddy O’Connor to draw level after 13 minutes before the visitors got their first point on the board.

The Antrim town side continued to call the shots, however, with Patchett and Miles Devine adding to their total to move them ahead by the 19th minute and as they continued to dominate Paddy O’Connor, substitute Peter McAuley and the excellent Tom Patchett added points to leave them leading 0-8 to 1-1 at the break

After the break St Comgall’s continued to edge the exchanges but were never able to shake off their opponents who got in for a second goal in the fourth minute to put themselves right back into contention.

This score seemed to knock the Antrim men out of their stride for a time before the excellent Tom Patchett got them going again with three quick points between the 14th and 20th minutes but O’Donnell’s hung in there with three points in reply to leave it evenly balanced going into the closing stages.

Miles Devine added a couple of late points to keep the St Comgall’s noses in front but it took a late goal from Caolan O’Loan to calm the jangling nerves of the home support and settle the issue as Naomh Comhghall crossed the winning line five points ahead.