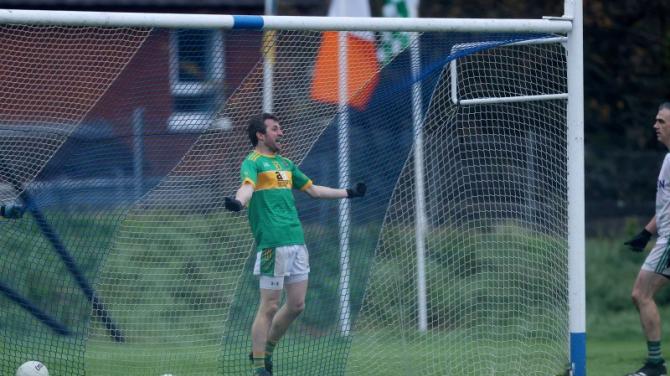 CREGGAN have been huffing and puffing over the last number of years in the Antrim Senior Football Championship and while they have come close, they were never able to blow the house down.

That all came to an end at Corrigan Park on Sunday when the edifice that was Aghagallon came tumbling down and Creggan, after a sixty seven year wait, were crowned Antrim senior football champions for the third time in the club’s history

Their first came an eternity ago in 1943 followed by their second eleven years later and since then they have come close on occasions, particularly in recent times but just did not have the necessary drive, or luck, to get them across the line.

Now the Padraig McNamee cup is finally in their possession and indeed could be there for some years to come.

Starting firm favourites Creggan lived up to that billing and, while they were pushed at times, there only looked one winner

The Staffordstown Road side were in control at the break with Matthew Rodgers, Kevin Small, Ruairi and Jamie McCann all chipping in to see them 0-7 to 0-2 ahead and looking good.

Aghagallon were always chasing, relying on the placed ball to keep them in contention and only scoring their first from play with ten minutes remaining.

However, they did keep the game alive until second half injury-time when the man with the most famous name in Gaelic football, Sam Maguire, capped his introduction with a goal to end Creggan’s long wait for Championship glory.

Leading by four, 0-11 to 0-7 as the game went into injury time, there was no way back for the St Mary’s side and it was at this stage that Creggan introduced their third replacement.

Long serving Maguire came into the fray with one minute gone but with his first touch of the ball crashed home the only goal of the game.

While it probably will forever be the talking point of the 2021 final, the team were already well on their way before Maguire grabbed the limelight.