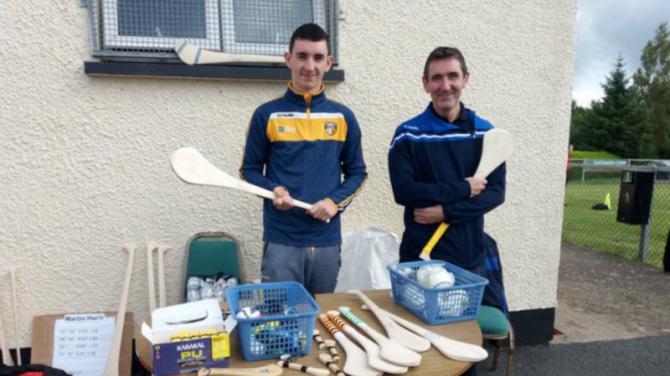 A RANDALSTOEN hurley stick manufacturer has warned that the facility may have to close due to a wood shortage linked to the Ukranian crisis and a virulent tree disease.

Following the news that one of Ireland’s most prominent hurley makers Canning Hurleys, have had to cease production, the Martin family have said that they believe that unless the ongoing situation changes, they will soon be closing down themselves.

Emmet Martin (25), of Martin Hurls in Randalstown, is citing the unavailability of ash timber due to the ash dieback disease, and the major producers buying up all available stock.

Emmet Martin has had an interest in hurling sticks from a very young age, turning his hand to the craft as a 15-year old schoolboy, playing with local club Tír Na nÓg.

After a few years of repairing broken hurleys along with his father Colum, Emmet tried his hand at making a few Camans from Ash that was growing in their own home field.

Emmet says he always tries to use the best ash available focusing on the grain and density of the wood.

This ensures the production of sticks to the highest quality.

Emmet’s hurleys are of a modern design with local and county club members enjoying playing with a ‘Martin Hurl’.

The company also makes bespoke gift boxes for clubs and individuals and Mr Martin has even appeared on the Irish version of Dragon’s Den.

Ash dieback is a highly damaging disease that attacks Ash trees native to Ireland and Britain.

While the potential impact of the disease on hurl making has been highlighted in the past, the war in Ukraine has fuelled fresh concerns.

Supply issues generated by the war in Ukraine means that larger manufacturers have bought up all the locally available ash.

At a meeting of a Stormont's Agriculture, Environment and Rural Affair’s commiitee this week North Antrim MLA Philip McGuigan said 450,000 hurls are made in Ireland every year.

He also said that 80 per cent of the ash comes from abroad, with Ukraine traditionally supplying the majority of that.

He suggested the committee writes to the agriculture minister for an assessment on the Ash dieback situation.

Mr McGuigan said: “Hurling and camogie are our national sport and neither can be played without hurls,” he said.

“In most sports players are very particular about the quality of their equipment and that is no different in the case of the tens of thousands of boys and girls and adults who play both hurling and camogie.

“The shortage of ash is therefore very concerning.”

A spokesman for the GAA said the association has been working with hurl manufacturers to come up with alternatives, although insiders say that plastic and bamboo alternatives are unlikely to be favoured by those who play the sport.

Mr Martin said that the situation was ‘a real crisis’ and that some makers are throwing in the towel, including Galway-based Canning.

“There's a very small pot of workable ash we can use

“It’s very important to get the message out, look after whatever hurls you have and just to be aware they are going to become very scarce and there will probably be a price hike as well,

“I have spent ten years trying to build this up, I have turned it from a hobby to a full time business and wanted to push on this year and this has rattled the cage.